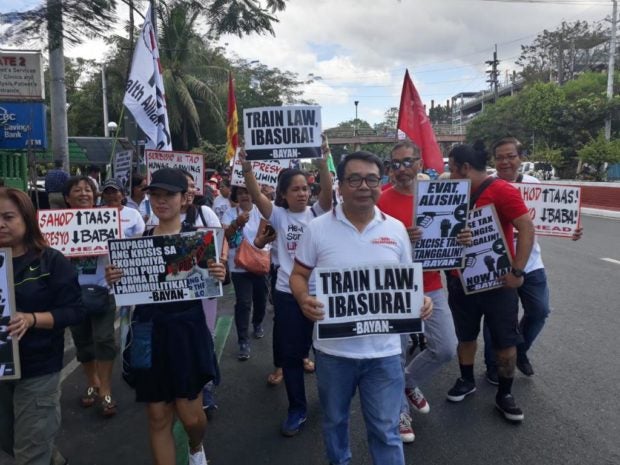 Bayan Muna chair and senatorial bet Neri Colmenares at a rally along East Avenue in Quezon City on the first day of the campaign period on February 12, 2019. PHOTO from Bayan Muna

MANILA, Philippines — Bayan Muna is the most preferred party-list group in the May 2019 midterm elections, a recent Pulse Asia survey released on Thursday showed.

The survey, conducted from March 23 to 27 among 1,800 adult respondents, revealed that Bayan Muna got an 8.50% voter preference.

Magsasaka sa Sakahan, Kaunlaran (Magsasaka) got the second spot with 6.45% voter preference while Gabriela followed with 6.04%.

Ako Bicol landed on the fourth spot with 4.72% voter preference while A Teacher had 4.58%.

Pulse Asia said the five party-list groups could get the maximum three seats each based on allocation rules.

The high-voter preference of Bayan Muna and Gabriela came despite being critical of the policies of the Duterte administration and being red-tagged by the military.

These are among the 14 party-list groups that got more than 2% voter preference, assuring them of a single seat at the House of Representatives.

Also in the same survey, the other party-list groups assured of one seat are Senior Citizens, Buhay, Akbayan, Amin, An Waray, Kalinga, Anakpawis, Cibac, and Angkla.

A total of 134 party-list groups are eyeing a Congress seat in the May 2019 midterm elections.

Pulse Asia said about three-quarters or 74% of voters “have heard, read, or watched something about the party-list system.”

The polling firm said this is “much higher” than the 61-percent party-list awareness level in February 2019.

Pulse Asia said the survey has an error margin of ± 2.3 percent. /jpv