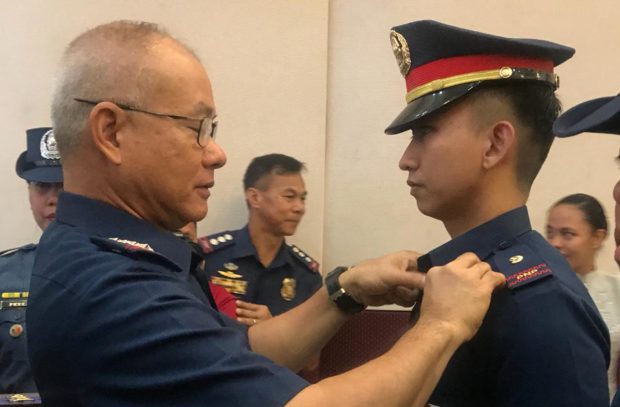 PNP chief General Oscar Albayalde confers to Lieutenant Jervis Allen Ramos, the top graduate of the PNPA Sansiklab Class of 2019, the Badge of Honor that signals his acceptance to the agency. INQUIRER.net photo / Cathrine Gonzales

The new officers were officially welcomed to the police force after receiving the Badge of Honor from the PNP.

No less than PNP chief General Oscar Albayalde awarded the badge to Lieutenant Jervis Allen Ramos, the top graduate of the class 2019, while other key officials of the agency conferred the badge to the rest of the new officers.

NOW: 138 newly-appointed police commissioned officers from the PNPA Sansiklab Class of 2019 are officially welcomed into the PNP as they receive the Badge of Honor from the agency. @inquirerdotnet pic.twitter.com/yQXpKnURLv

In his speech at the conferment ceremony held at Camp Crame, Albayalde emphasized that the PNP will not tolerate rogue policemen, as he told the new police officers that they “do not have the right to tarnish” the badge.

Albayalde said he is also “honored” and “proud” to welcome to the organization the new officers who graduated from the academy in March.

According to Albayalde, the official welcoming of the new officers who have “fresh insights” coincides with the current situation where the nation is “in the midst of profound change advocated by no less than President Rodrigo Duterte.”

“With the PNP at the frontlines of these chains particularly in addressing the scorch of crime, illegal drugs, and corruption, your PNP leadership will need all the help in facing the challenge,” Albayalde said.

In a separate speech, Ramos acknowledged the “emerging adversities” that the police force is facing, but urged the class to “stand by principles of service, honor and justice at all times and at all cost.”

“Today as these badges are now bestowed on our hearts, these shall serve as a reminder of the great responsibility that we bear as a leader and a public servant,” Ramos said. /jpv