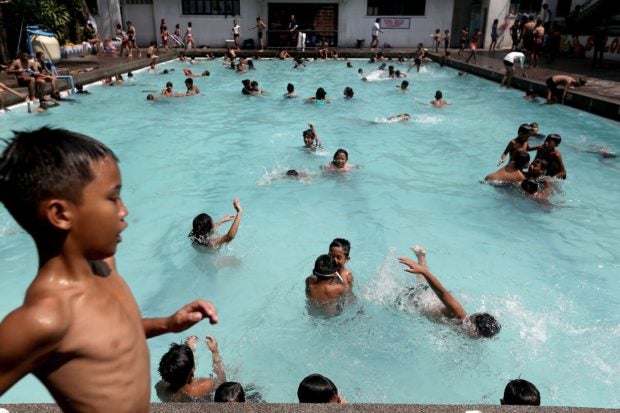 Children and adults take a dip in a swimming pool to beat the summer heat. (File photo by RICHARD REYES / Philippine Daily Inquirer)

MANILA, Philippines — The hot season is not yet over and is about to get hotter in the next few weeks, the Philippine Atmospheric, Geophysical and Astronomical Services Administration (Pagasa) said Wednesday.

Pagasa weather forecaster Aldczar Aurelio said the peak of summer season happens on the third week of April and ends on the second week of May.

“Well, it’s only about to get hotter. Based on our history and my experience as a weather forecaster, the high temperature falls on the third or last week of April until the first or second week of May,” Aurelio, speaking in Filipino, said in an interview over AM radio station DZMM.

In Metro Manila, the heat index on Wednesday reached 39°C at the Science Garden in Quezon City and 41.4°C in Pasay City.

According to Pagasa’s heat index board, the highest heat index reported today was at 48.8°C in Dagupan City, Pangasinan, at around 2 p.m.

A total of 17 areas reported a heat index considered at the “danger” level. Pagasa considers a heat index to be dangerous once it hits 41°C and above.

Following are the areas that reported a heat index at the “danger” level:

Pagasa advised the public to stay indoors as much as possible, wear lightweight and light-colored clothing, and drink water regularly to keep cool.

Read Next
Marikina police chief: LGUs have their own gas allocation
EDITORS' PICK
Smart offers wireless fiber-like speeds to Filipino homes with country’s first 5G Prepaid Home WiFi
Legarda: Ending Violence Against Women, a cause for all
This new condo in the South will make you want to turn a new leaf
National COVID-19 vaccination drive gets over 5.3 million people vaxxed so far
Pandemic prognosis: Where does it go from here?
Google won’t accept election ads for 2022 national polls
MOST READ
Bongbong Marcos to face another disqualification case
Christine Bersola, Julius Babao cleared of cancer after colonoscopy, endoscopy
‘Maraming nagpapagkamatay sumali’: Bongbong-Sara’s full Senate slate out soon, says Imee
Tropical storm intensifies as it approaches PAR
Don't miss out on the latest news and information.