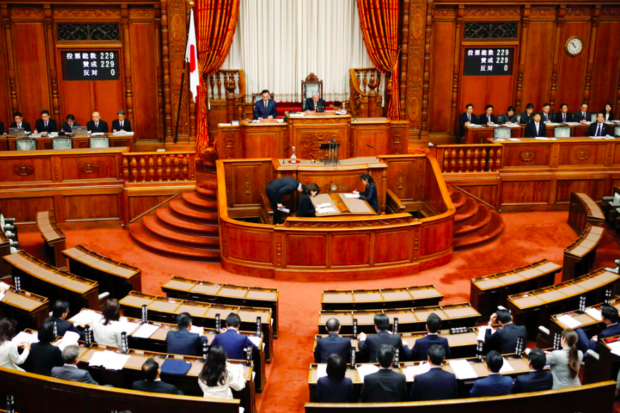 This general view shows a plenary session of upper house house after Eugenics Protection Law was passed in parliament in Tokyo on April 25, 2019. AP

TOKYO — Japan’s government apologized Wednesday to tens of thousands of victims forcibly sterilized under a now-defunct Eugenics Protection Law, which was designed to “prevent the birth of poor-quality descendants,” and promised to pay compensation.

Chief Cabinet Secretary Yoshihide Suga said he was offering “sincere remorse and heartfelt apology” to the victims. It came after the parliament earlier Wednesday enacted legislation to provide redress measures, including 3.2 million yen ($28,600) compensation for each victim.

An estimated 25,000 people were given unconsented sterilization while the 1948 Eugenics Protection Law was in place until 1996. The law allowed doctors to sterilize people with disabilities. It was quietly renamed as the Maternity Protection Law in 1996, when the discriminatory condition was removed.

The redress legislation acknowledges that many people were forced to have operations to remove their reproductive organs or radiation treatment to get sterilized, causing them tremendous pain mentally and physically.

Health, Labor and Welfare Minister Takumi Nemoto said that as head of the department in charge of the compensation, he will do utmost to provide the one-time redress money for the entitled recipients, many of them aging and handicapped, as soon as possible.

Prime Minister Shinzo Abe, in his statement issued hours later, said the same problem should never be repeated. “We will do all we can to achieve a society where no one is discriminated against, whether they have illnesses or handicaps, and live together while respecting each other’s personality and individuality.”

The government had until recently maintained the sterilizations were legal at the time.

The apology and the redress law follow a series of lawsuits by victims who came forward recently after breaking decades of silence. That prompted lawmakers from both ruling and opposition parties to draft a compensation package to make amends for the victims.

The plaintiffs are seeking about 30 million yen each ($268,000) in growing legal actions that are spreading around the country, saying the government’s implementation of the law violated the victims’ right to self-determination, reproductive health and equality. They say the government redress measures are too small for their suffering.

In addition to the forced sterilizations, more than 8,000 others were sterilized with consent, though likely under pressure, while nearly 60,000 women had abortions because of hereditary illnesses. However, the redress law does not cover those who had to abort their pregnancy, according to Japan Federation of Bar Associations.

Among them were about 10,000 leprosy patients who had been confined in isolated institutions until 1996, when the leprosy prevention law was also abolished. The government has already offered compensation and an apology to them for its forced isolation policy. /ee

ADVERTISEMENT
Read Next
North Korea’s Kim arrives in Russia before summit with Putin
EDITORS' PICK
COVID-19 has infected more than 69,000 people globally
COVID-19 screening checkpoints remain for those going to Boracay
Can travel make you fall in love?
The Najima Drive: Nissan’s MD drives #GoAnywhere adventures in new video series
Can Your Brand of Meat Be Trusted? Here’s How to Know You’re Eating Safe Meat
Xi’s early involvement in virus outbreak raises questions
MOST READ
WATCH: Sarah Geronimo dances ‘fierce’ version of ‘Tala’
2,000 iPhones given for free by Japanese gov’t to passengers stuck on ship due to coronavirus
Xi’s early involvement in virus outbreak raises questions
NBA loses ‘hundreds of millions’ in China over Hong Kong tweet
Don't miss out on the latest news and information.