North Korea’s Kim arrives in Russia before summit with Putin

SEOUL, South Korea – North Korean leader Kim Jong Un arrived in Russia by train on Wednesday, a day before his much-anticipated summit with President Vladimir Putin that comes amid deadlocked diplomacy on his nuclear program.

South Korea’s Yonhap news agency published photos of Kim, dressed in a black coat and a fedora, meeting with Russian officials at Russia’s Hasan train station near its border with the North. Russian news agency Tass quoted a local official as saying Kim was given flowers, bread and salt at the station. 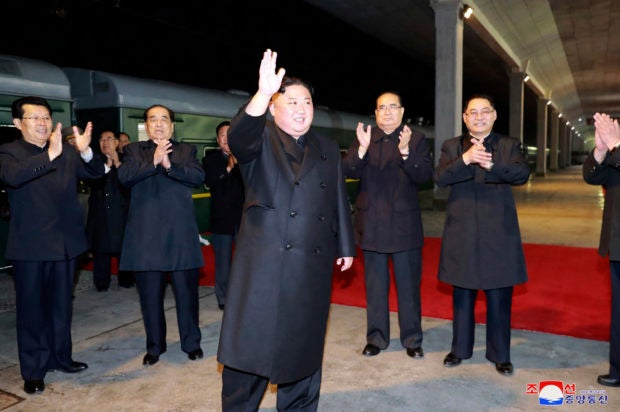 In this photo provided by the North Korean government, North Korean leader Kim Jong Un waves at an undisclosed train station in North Korea Wednesday, April 24, 2019, before leaving for Russia. Independent journalists were not given access to cover the event depicted in this image distributed by the North Korean government. The content of this image is as provided and cannot be independently verified. Korean language watermark on image as provided by source reads: “KCNA” which is the abbreviation for Korean Central News Agency. (Korean Central News Agency/Korea News Service via AP)

Kim was traveling to the Pacific port city of Vladivostok for a summit with Putin on Thursday.

He became the first North Korean leader to travel to Russia since his late father, Kim Jong Il, visited in 2011.

Yonhap, citing an analysis of North Korean photos on Kim’s departure, speculated Kim may have left from a rural area, not Pyongyang.

Kim was expected to arrive in Vladivostok around late Wednesday afternoon and attend a dinner reception hosted by Russian Deputy Prime Minister Yury Trutnev, according to South Korean media.

After his summit with Putin, Kim may tour neighboring facilities or landmarks before departing for home on Friday, the reports said.

In February, Kim’s second summit with Trump in Hanoi ended without any agreement because of disputes over U.S.-led sanctions.

There have since been no publicly known high-level contacts between the U.S. and North Korea, though both sides say they are still open to a third summit.

Kim wants the U.S. to ease the sanctions to reciprocate some partial disarmament steps he took last year.

But the U.S. maintains the sanctions will stay in place until North Korea takes more significant denuclearization steps.

Some experts say Kim could try to bolster his country’s ties with Russia and China.

Others say it’s not clear how big of a role Russia can play in efforts to restart the nuclear negotiations. The summit could allow Putin to try to increase his influence in regional politics and the standoff over North Korea’s nuclear program. /gsg