Thief wearing ‘Be a good human’ shirt during burglary arrested 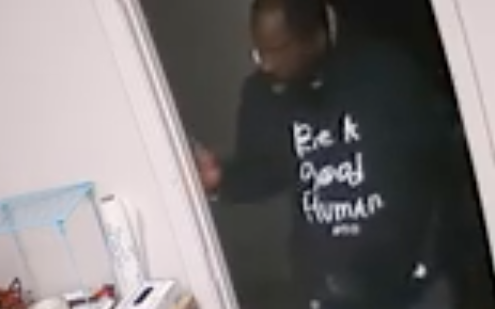 Alexander Shanel Brown, 43, broke into the warehouse of a handmade jewelry brand on Good Friday, April 19. Image: Screengrab from Facebook/Ringcrush

A man from Georgia, United States, who was wearing a sweatshirt that says, “Be a Good Human,” was arrested for stealing $100,000 (over P5.2 million) worth of items from a handmade jewelry brand’s warehouse during the Holy Week.

Alexander Shanel Brown, 43, was caught on a surveillance camera breaking into the warehouse of fashion accessory brand Ringcrush on Good Friday, April 19, as per Fox 5. The surveillance footage was uploaded by the company’s Facebook page on April 22.

Contrary to what his shirt preaches, Brown was caught breaking into the property and trying on rings. He then left with bags of jewelry, which the investigators suspected were to be sold in pawnshops, according to the report.

With the help of a tipster and the local media, the police identified and arrested Brown, who is now facing a second-degree burglary charge.

“I’m very thankful for that person,” said the owner of the company, Bailey Lehrer, as per report. “They [do not know] know who I am, and they did that for me — a complete stranger.”

Ringcrush also posted an update yesterday, April 23, on its Facebook page, with a photo of the recovered jewelry and the sweatshirt Brown was wearing during the heist.

The homemade jewelry brand has yet to check inventory to find out if the items were all recovered. However, the company thanked the police, local media and those who shared the news.

“Atlanta [may] have one or two bad apples, but seems like the majority of us are [good humans],” Ringcrush stated. Casey Eridio/JB