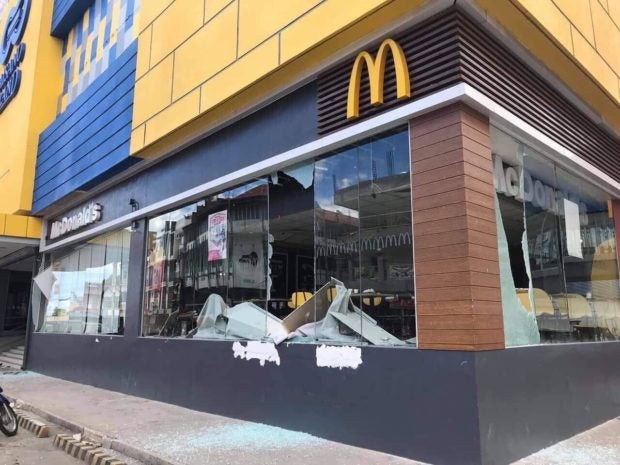 The Philippine Institute of Volcanology and Seismology (Phivolcs) said the 6.5-magnitude quake struck a few kilometers off San Julian town in Eastern Samar.

No fatalities had been reported as of 4 p.m. on Tuesday, Eastern Samar Rep. Ben Evardone said.

“I hope the report will stay as it is,” he said.

The Philippine National Police chief, Gen. Oscar Albayalde, said authorities in the region were still consolidating reports of possible damage in Samar as of 3:30 p.m.

“Hopefully, there are no casualties,” Albayalde said.

Phivolcs said the quakes of Monday and Tuesday were not related, as they were caused by different activities taking place beneath the earth’s surface.

Tectonic in origin, Tuesday’s quake had an intermediate depth of 63 kilometers, much deeper than the one that rocked Luzon on Monday and had a depth of only 10 kilometers.

Intensities ranging from 2 to 6 were reported in several areas, with the strongest shaking felt in San Julian.

Tremors were also felt in various towns in the provinces of Leyte, Southern Leyte, Negros Occidental and Surigao del Sur, as well as in some areas in Bicol region, including Naga City, Sorsogon City and Panganiban town in Catanduanes.
Fewer aftershocks

At least one of the aftershocks was felt, Phivolcs said.

Due to the quake’s depth, Phivolcs said, fewer aftershocks were expected, compared with Monday’s temblor in Luzon that had already logged more than 400 aftershocks as of Tuesday.

It was due to the Philippine Sea plate crashing against the archipelago, Grutas said.

Monday’s quake was caused by movement in a local fault, and it was centered on an area in the mountains between Zambales and Pampanga provinces.

Pampanga suffered the most damage, as it sits on soft sediment, mostly lahar from the eruption of Mt. Pinatubo in 1991, Phivolcs said.

Louis Po, a Grade 12 student of Remedios Trinidad Romualdez Medical Foundation School, sprained her left leg while trying to get out of 578 Emporium.

“I was in the elevator when the earthquake happened and suddenly, there was a mad rush of people going down,” she said.

Artemio Caneja, regional director of the Department of the Interior and Local Government, said he was having a meeting at Hotel Alejandro when the earthquake struck, sending people at the meeting ducking and taking cover.

“And after a while, we all went outside the hotel,” Caneja said.

National Grid Corporation of the Philippines said power was restored in parts of Samar and Northern Samar after 5 p.m.

Residents trembled in fear when the earthquake hit in San Julian.

According to Irene Consultado, the municipal information officer, residents poured into the streets as the ground shook.

Some temporarily stayed at San Julian Central Elementary School, which serves as an evacuation center.

Evardone said he instructed the Department of Public Works and Highways to assess the damage to infrastructure.

“Our paramount concern right now is the safety of our people. There will be aftershocks and we want to avoid any accidents. We really can’t be sure right now,” he said.

Glass windows in some buildings were broken, but the disaster council had yet to release information about injuries.

Classes and offices were also suspended.

The disaster council in Leyte said several barangay halls and schools, particularly in the towns of Dulag and Babatngon, reported cracks on their buildings. —With reports from Leo Udtohan and Rachel Arnaiz