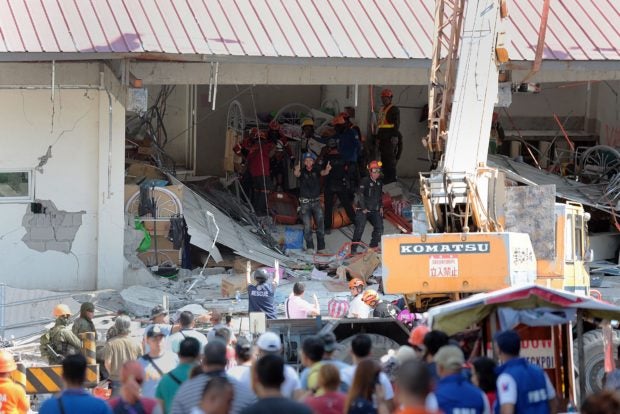 SIGN OF LIFE A rescuer signals to the crowd that one more survivor has been pulled from the rubble of the collapsed Chuzon Supermarket in Porac, Pampanga province, on Tuesday. —GRIG C. MONTEGRANDE

MANILA, Philippines — Rescuers were scrambling on Tuesday to reach more than 90 people trapped beneath the rubble of a supermarket in Porac, Pampanga province, that collapsed when a 6.1-magnitude earthquake shook Luzon on Monday afternoon.

The bodies of five people were pulled from the rubble of Chuzon Supermarket, Angelina Blanco, executive officer of the provincial disaster council reported on Tuesday.

The National Disaster Risk Reducton and Management Council (NDRRMC) said on Tuesday the death toll had reached 16, with 81 people injured and 24 missing. It could not confirm the figures, however, saying the information was for “validation.”

A 6-year-old boy died in a landslide at Barangay Buhawen in San Marcelino town, Zambales province.

President Rodrigo Duterte was scheduled to tour quake damage in Pampanga on Tuesday afternoon, according to his spokesperson, Salvador Panelo.

Malacañang appealed to the public not to spread fake news in the wake of the disaster.

“We ask the public to remain calm but vigilant and we urge them to refrain from spreading disinformation [on] social media that may cause undue alarm, panic and stress to many people,” Panelo said in a statement.

Acting on a recommendation of the NDRRMC, Executive Secretary Salvador Medialdea ordered the suspension of work in government offices in Metro Manila to ease the load on the public transport system.

Medialdea also directed governors and mayors in quake-hit provinces and cities to assess the damage in their areas and take necessary measures to ensure public safety.

The Philippine National Police went on full alert in Central Luzon and Eastern Visayas, where a 6.5-magnitude earthquake struck at 1:37 p.m. on Tuesday. (See story on this page.)

In Porac, Red Cross volunteers, Army troops, police and villagers used four cranes, crowbars and sniffer dogs to look for people trapped beneath the rubble of Chuzon Supermarket, some of whom were still yelling for help on Monday night.

Authorities inserted a large orange tube into the rubble to blow oxygen in the hope of helping people pinned there to breathe.

Eight injured supermarket workers were pulled out of the rubble on Monday night.

By morning, rescuers pulled out a man alive, sparking cheers and applause.

“We’re all very happy, many clapped their hands in relief because we’re still finding survivors after several hours,” Porac Councilor Maynard Lapid told The Associated Press (AP) by telephone from the scene, adding another victim was expected to be pulled out alive soon.

Among the dead in the collapsed supermarket was a child whose parents were working in South Korea and four employees who were from Tarlac province.

The rest of the supermarket workers, estimated to be more than 90, remained unaccounted for, according to Pampanga Vice Gov. Dennis Pineda.

“We have no information on how many of them managed to escape or were trapped inside the collapsed structure,” Pineda told the Inquirer by phone.

“We advised the management to tell the survivors to report and be counted,” he said.

The four-story building housing Chuzon Supermarket crashed when the quake rocked Pampanga, as well as several other provinces in Luzon, including Metro Manila, on Monday afternoon.

It was built in 2013 on former riceland at Barangay Cangatba according to a plan approved by the municipal engineer, who had long retired.

Why the building collapsed in the earthquake remained undetermined.

Like the rest of Pampanga, Porac was formed from the accumulation of sand from the eruptions of Mt. Pinatubo, Mt. Arayat and other volcanoes in the region, according to Renato Solidum, chief of the Philippine Institute of Volcanology and Seismology (Phivolcs).

This means the area’s ground foundation is not solid, Solidum said.

But Public Works Secretary Mark Villar, who toured quake damage in the region on Tuesday, said that “shouldn’t be an excuse.”

“There are engineering solutions,” he said.

Villar said his department would get samples from the building to determine why it failed to stand in the earthquake.

Pampanga is not in the path of the Philippine fault zone, but scientists are examining the Lubao lineament that leads to Mt. Natib in Bataan province, Solidum said.

Gov. Lilia Pineda said at least 10 people died in her province, including those who perished in hard-hit Porac.

She said she had asked the mayors of Apalit, Santo Tomas, Floridablanca and Guagua to shut down temporarily Chuzon branches in their towns to give way to an assessment of their structural integrity.

Vice Governor Pineda, presiding officer of the Sangguniang Panlalawigan, said a state of calamity had been declared in the second district of the province, covering Porac, Floridablanca, Guagua, Sasmuan, Lubao and Santa Rita.

The declaration meant a freeze on the prices of basic goods in Pampanga’s second district, Trade Secretary Ramon Lopez said.

The powerful quake damaged many houses, concrete roads, bridges, Roman Catholic churches and the terminal of a secondary international airport at Clark Freeport in Pampanga.

The Archdiocese of San Fernando has closed 24 heritage churches in Pampanga since Monday night.

The churches will remain closed until declared safe, the archdiocese said.

The cross on the belfry of San Agustin Parish Church in Lubao was damaged when parts of the cupola fell.

Solidum said the quake was caused by movement in a local fault at a depth of 12 kilometers near the town of Castillejos in Zambales.

More than 400 aftershocks, mostly unfelt, had been recorded by Tuesday, exceeding the initial expectation of around 100 in the next two weeks after the initial quake.

The Department of Public Works and Highways estimated on Tuesday that the temblor caused at least P200 million in damage to roads in Central Luzon.