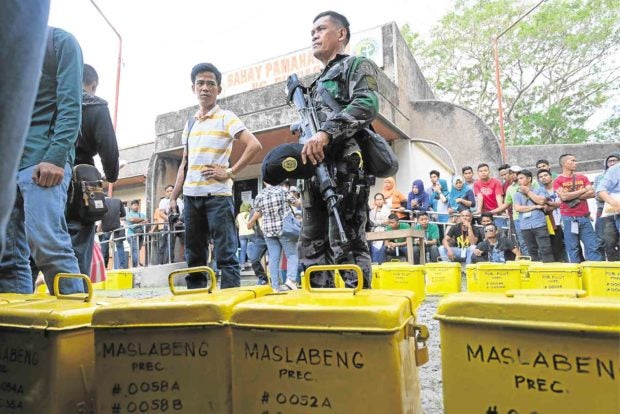 POLL DUTY A policeman guards ballot boxes in this file photo taken in Maguindanao, where members of the Mangudadatu clan are facing off for the province’s top elective post. BONG S. SARMIENTO

BULUAN, Maguindanao, Philippines — The Mangudadatu political clan, whose members have long ruled Sultan Kudarat province, has fielded yet another member to wrest power in nearby Maguindanao province, where a relative, Gov. Esmael “Toto” Mangudadatu, is serving his last term.

Suharto is running for Sultan Kudarat governor to succeed his father, Gov. Pax Mangudadatu. Esmael and Freddie are sons of the late Datu Pua Mangudadatu, former mayor of Buluan, Maguindanao.

Brothers Pax and Pua were known mortal enemies in the 1980s, with their bloody rivalry claiming the lives of a number of family members and supporters.

Pax served as governor of Sultan Kudarat from 1998 to 2007, while Suharto ruled the province from 2007 to 2016. Pax ran and won again in the 2016 gubernatorial elections, while Suharto was elected representative of the first congressional district.

The Mangudadatus virtually control Buluan, Mindanao’s third largest lake which straddles the towns of Buluan (Maguindanao) and Lutayan (Sultan Kudarat). Pua’s children lorded it over the Buluan side of the lake while Pax and his children controlled the Lutayan side.

Over the years, cooler heads had gradually settled the “rido” (clan war) between the Mangudadatus.

Mohamad Taha Abdulgapor, a professor of political science and Islamic studies at the Mindanao State University-General Santos City campus, expressed fears that the move of the Mangudadatus of Sultan Kudarat to join the political fray in Maguindanao could revive the rido.

“Looking at history, they are mortal enemies,” Abdulgapor told the Inquirer, referring to the older Mangudadatus.

Six candidates are vying for governor of Maguindanao in the May 13 elections, according to Commission on Elections
(Comelec) records, but a showdown is expected between Mariam and Freddie, who both have wealth and political machinery.

Abdulgapor noted that the Mangudadatus of Sultan Kudarat wanted to expand their political control to Maguindanao by fielding Mariam, also a descendant of another big political clan in the province, the Sangkis.

Mariam is running under the Nacionalista Party using a political slogan of “Gobyernong may malasakit sa Maguindanao” (A government that cares for Maguindanao). “Under my term, Maguindanao will soar like an eagle. I will be a mother to everybody in Maguindanao,” she said in one of her sorties.

Freddie, the Partido Demokratiko Pilipino-Lakas ng Bayan provincial stalwart, has pledged to sustain the “totoong serbisyo” (true service) programs put in place by his brother, Esmael, who ended the long reign of the Ampatuan family in 2010.

“Whatever my brother Governor Toto started, I will sustain and even make them better for the sake of our people,” he told his supporters.

Several members of the Ampatuan clan, including the late former Maguindanao Gov. Andal Ampatuan Sr. and his sons Zaldy (former governor of the Autonomous Region in Muslim Mindanao) and Andal Jr. (former Datu Unsay mayor), were among the principal suspects in the Nov. 23, 2009, massacre that killed 58 persons, including 32 media workers.

Esmael escaped the mass murder by letting his wife and other female relatives file his certificate of candidacy for the province’s top post then.

He is now running for representative of the province’s second congressional district in May’s elections.

Maj. Arvin Encinas, spokesperson for the Army’s 6th Infantry Division, said the military had conducted a series of meetings with the Comelec to ensure the conduct of orderly elections in Maguindanao.

Encinas said the military was expecting the Mangudadatus to engage in a “friendly” contest as they reminded local candidates to keep the elections clean and peaceful.