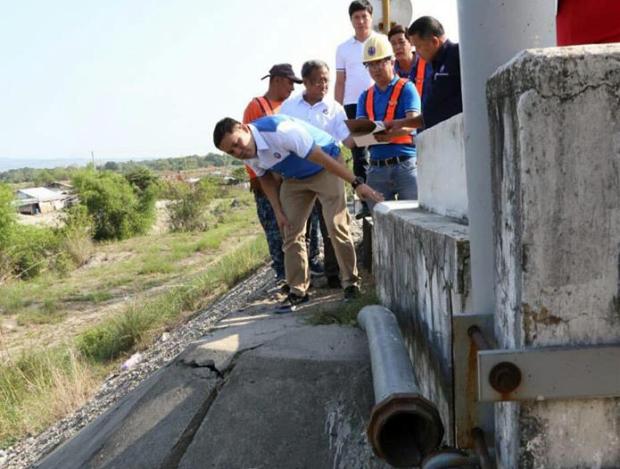 Public Works Secretary Mark Villar inspects a cracked portion of the Consuelo Bridge in Floridablanca, Pampanga, on Tuesday, April 23, 2019, a day after a magnitude 6.1 earthquake shook several parts of Luzon. (Photo from his Facebook account)

MANILA, Philippines — The cost of damage to roads caused by the 6.1-magnitude earthquake that primarily hit Central Luzon on Monday stood at least P200 million, according to an estimate of the Department of Public Works and Highways (DPWH).

On Tuesday, as he did an inspection tour of Pampanga, Public Works Secretary Mark Villar assured local governments that the DPWH would help them assess damage to infrastructure and help them in repair work the soonest possible time.

In Floridablanca, Villar said that the DPWH was targeting to reopen Consuelo Bridge to light vehicles Wednesday. However, two major highways — the Megadike Road in Bacolor and Samsuan-Lubao Road — remain impassable to motorists as engineers were still inspecting their structural integrity.

Despite this, Villar said that no area in the province was cut off due to the quake since there were alternate routes that motorists could take.

With regards to the collapsed Chuzon Supermarket in Porac, Villar said the DPWH would have to take samples from the building to determine why it failed to withstand the quake, considering it was constructed only four years ago. For now, he noted though that focus was on the recovery of potential survivors.

As of this writing, authorities said five people were found dead in the rubble of the supermarket, while nine others were rescued.

Villar dispelled rumors that the reason why some Pampanga towns had the most damage was that their structures were built on top of the lahar flow coming from Mount Pinatubo when it erupted in 1991.

“There are engineering solutions. It shouldn’t be an excuse,” Villar said. “But I would be able to get a better assessment of what really happened if we get samples and analyze these.”

He assured, though, that roads and other infrastructure being built by the DPWH were no seismic-rated, which means that they could withstand strong earthquakes.

Meanwhile, as a 6.2-magnitude earthquake hit Eastern and Central Visayas and the Bicol Region on Tuesday, Villar ordered the deployment of personnel who would assess the structural integrity of key infrastructures in these areas. He urged the public to report to their hotline 165-02 structures that might have been damaged by the quake.