MANILA, Philippines — The National Capital Region Police Office (NCRPO) will be on full alert until Wednesday following the magnitude 6.1 earthquake that shook Metro Manila and other parts of Luzon Monday afternoon.

Operations in all Metro train lines suspended due to magnitude 6.1 quake

MRT 3 back to normal operations on Tuesday

While the NCRPO remains on full alert status, Eleazar said that no major damage in Metro Manila have been reported so far. 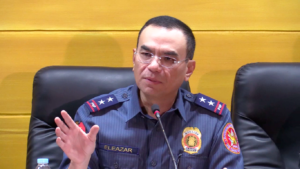 Following Monday’s earthquake, 11 fatalities have so far been reported in the province of Pampanga.

Meanwhile, Eleazar advised the public to take earthquake drills seriously to ensure readiness should earthquakes happen in the future.

“So nakita natin kahapon na because of the earthquake drills that we are regularly conducting, so maraming mga establishment na sumunod dito,” he said.

Further, Eleazar said that there no damage on police precincts due to the earthquake have been reported so far.

“Based on the ongoing assessment on the damage done by the earthquake, wala naman tayong mga police stations or structures na affected ng earthquake natin kahapon,” he said

This after Philippine National Police (PNP) chief General Oscar Albayalde ordered an inspection and assessment of police stations and other facilities in Metro Manila and Central Luzon. /jpv