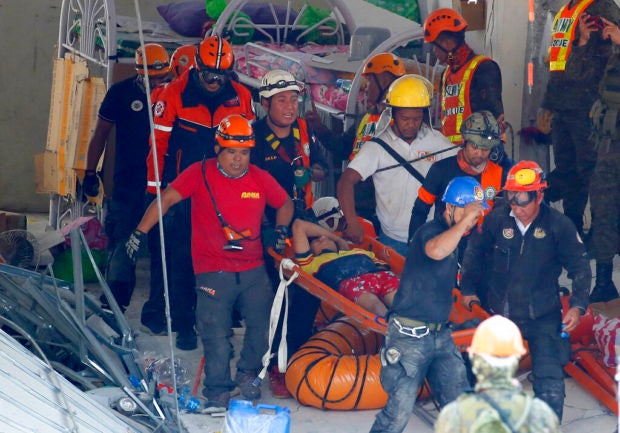 Rescuers carry an earthquake survivor after being pulled out from the rubble of a commercial building following a 6.1 magnitude earthquake in Porac township, Pampanga province, north of Manila, Philippines, Tuesday, April 23, 2019. The strong earthquake struck the northern Philippines Monday trapping some people in a collapsed building, damaged an airport terminal and knocked out power in at least one province, officials said. AP/Bullit Marquez

CITY OF SAN FERNANDO — The rest of the more than 90 employees of the ill-fated Chuzon Supermarket in Porac town in Pampanga could not be accounted for, according to Vice Governor Dennis Pineda, who supervised the rescue operation at the collapsed four-storey building on Monday night.

What rescuers have so far retrieved were four dead and eight injured workers, he said.

“We were informed that Chuzon here employs more than 90 workers. We have no information on how many of them have managed to run to safety or were trapped inside the collapsed structure. We advised the management to tell the survivors to report and be counted as alive,” Pineda told the Inquirer by phone.

He also asked the mayors of Apalit, Sto. Tomas and Guagua towns to order the temporary closure of Chuzon branches there to give way to the assessment of the buildings.

Pineda, presiding officer of the Sangguniang Panlalawigan, said a state of calamity has been declared in the province’s second district covering the towns of Porac, Floridablanca, Guagua, Sasmuan, Lubao, and Sta. Rita.

The district bore the brunt of the tremor that claimed 10 lives as of Tuesday, severed the boundary arc between Pampanga and Bataan, damaged not less than 10 heritage churches and cracked several portions of the FVR Megadike, Pampanga’s last defense against lahar from Mt. Pinatubo’s 1991 eruptions.

A state of calamity allows the local government to use a chunk of their five-percent disaster response fund for rehabilitation work. /lzb