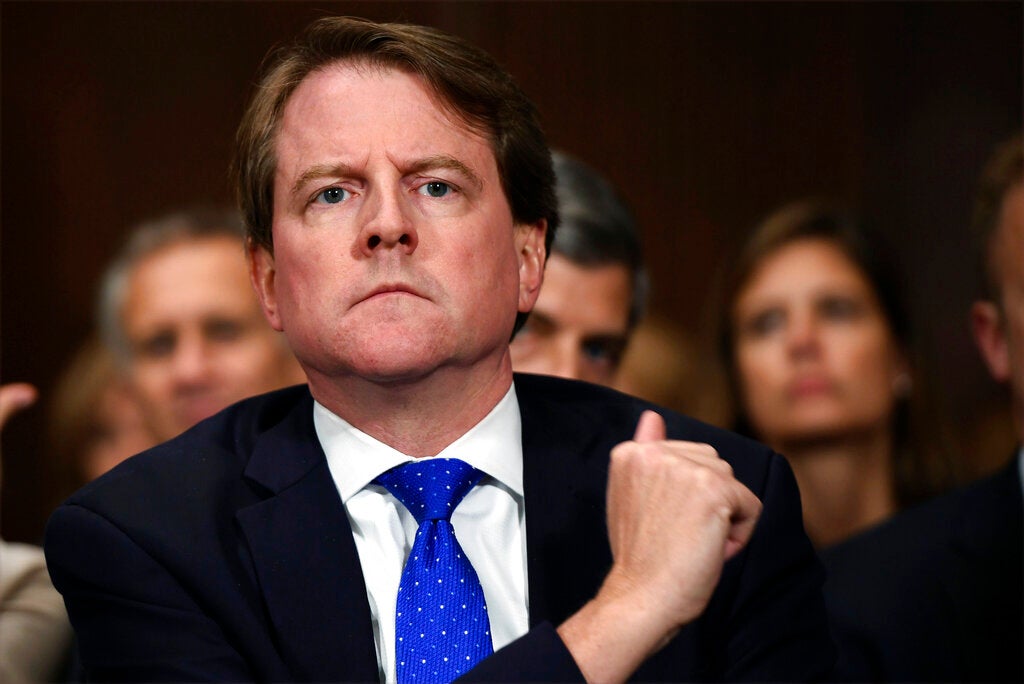 The New York Democrat announced his court action to compel McGahn to testify before the panel and provide documents. According to special counsel Robert Mueller’s report, McGahn was among the Trump aides who effectively halted the president’s efforts to influence the investigation, rebuffing his demand to set Mueller’s firing in motion.

“The Special Counsel’s report, even in redacted form, outlines substantial evidence that President Trump engaged in obstruction and other abuses,” Nadler said in a statement. “It now falls to Congress to determine for itself the full scope of the misconduct and to decide what steps to take in the exercise of our duties of oversight, legislation and constitutional accountability.”

The subpoena angered Republicans even as it functioned as a reassurance to impatient Democrats who have called for Trump’s impeachment. Nadler released the statement and the subpoena as House Speaker Nancy Pelosi in a conference call urged rank-and-file Democrats to let the investigative process establish facts before talking up impeachment.

Rep. Doug Collins of Georgia, the top Republican on the Judiciary panel, pointed out that McGahn sat for 30 hours of interviews with Mueller and said Nadler was asking for some items that he knows cannot be produced.

McGahn was a vital witness for Mueller, recounting the president’s outrage over the investigation and his efforts to curtail it.

He described, for instance, being called at home by the president on the night of June 17, 2017, and directed to call the Justice Department and say that Mueller had conflicts of interest and should be removed. McGahn declined the command, “deciding that he would resign rather than trigger what he regarded as a potential Saturday Night Massacre,” the Mueller report said.

Once that episode became public in the news media, the president demanded that McGahn dispute the reports and asked him why he had told Mueller about it and why he had taken notes of their conversations. McGahn refused to back down, the report said.

Nadler’s announcement came as he joined Pelosi on a conference call with rank-and-file Democrats for the first caucus-wide discussion of the Mueller report since it was released on Thursday. In a letter earlier Monday, Pelosi acknowledged that the party’s officeholders have a range of views on how to proceed. But she counseled them repeatedly to go after facts, not resort to “passion or prejudice” in the intense run-up to the 2020 presidential and congressional elections.

She is the de facto leader of her party until Democrats nominate a presidential candidate.

“We all firmly agree that we should proceed down a path of finding the truth,” Pelosi wrote. “It is also important to know that the facts regarding holding the president accountable can be gained outside of impeachment hearings.”

“Not even a little bit,” he said when asked Monday whether he was concerned about impeachment. However, his many tweets seeking to undermine the report’s credibility indicate he is hardly shrugging it aside.

“Only high crimes and misdemeanors can lead to impeachment,” he said Monday on Twitter. “There were no crimes by me (No Collusion, No Obstruction), so you can’t impeach. It was the Democrats that committed the crimes, not your Republican President!”

“We must show the American people we are proceeding free from passion or prejudice, strictly on the presentation of fact,” she wrote. She added: “Whether currently indictable or not, it is clear that the president has, at a minimum, engaged in highly unethical and unscrupulous behavior which does not bring honor to the office he holds.”

A series of hearings and investigations, particularly in the Democrat-controlled House, is likely to keep in public unflattering details about Trump’s behavior provided both by the report and by his former legal fixer, Michael Cohen. Congressional panels are demanding the unredacted version of the Mueller report and its underlying material gathered from the investigation. Attorney General William Barr is expected to testify in the House and Senate next week. And House Judiciary Committee Chairman Jerrold Nadler, D-N.Y., has summoned Mueller to testify next month, though no date has been set.

Mueller’s report last week described in vivid detail episodes in which Trump is said to have dispatched allies to fire Mueller, shut down his investigation and lie. The strength of the findings kicked off a struggle among Democrats over what to do now — show restraint and investigate, or try to impeach?

Sen. Elizabeth Warren of Massachusetts and Julian Castro, a former Housing and Urban Development secretary, are for impeachment proceedings.

Other Democratic candidates, including Sens. Cory Booker of New Jersey and Kamala Harris of California, have suggested it is too soon. New York Sen. Kirsten Gillibrand, asked if she’d support moving forward given a possible roadmap by the Mueller report, said in a phone interview Monday that she wants more information.

It remains to be seen how many Democrats will get on the impeachment bandwagon. The issue has split the party since the day the new Congress was sworn in. That January night, freshman Rep. Rashida Tlaib, D-Mich., was recorded using a profanity to tell supporters the Democrats were going to impeach Trump.

After Mueller’s report was released, the most prominent of the Democratic freshmen, Rep. Alexandria Ocasio-Cortez of New York, signed on to Tlaib’s resolution calling for an investigation into Trump’s conduct and the question of whether it merits a formal charge in the House.

“Mueller’s report is clear in pointing to Congress’ responsibility in investigating obstruction of justice by the President,” Ocasio-Cortez tweeted.