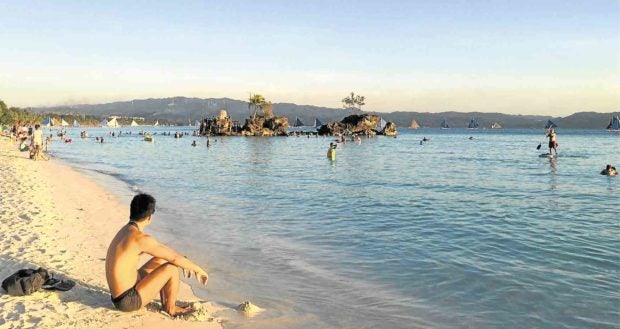 SUNSET WATCH A tourist enjoys a spot on the beach, away from the crowds, near Willy’s Rock as he waits for sunset on Boracay Island. —ROBERT JAWORSKI L. ABAÑO

ILOILO CITY — Helicopter tours and boats blaring music on Boracay Island should be regulated to avoid disrupting the bats’ natural habitat, according to a group advocating the protection of endangered fruit bats.

Friends of the Flying Foxes (FFF) said bats needed a 200-meter buffer zone from their roosting site so human activity and loud noises would not disturb their sleeping and mating patterns, according to a letter that the group sent to the Boracay Inter-Agency Task Force, Environment Secretary Roy Cimatu and the Malay municipal government in Aklan province.

The Boracay-based FFF, which is composed of conservation volunteers, also asked the government to conduct an environmental impact assessment to determine what caused the dramatic decline of the bat population on the resort island.

The helicopter tours, either for an aerial view of Boracay’s beaches or the whole island, are offered online or direct booking by various operators to tourists, photographers and videographers. The tours cost from P5,300 per person for a 10-minute flight to P40,000 per person for an hourlong trip.

The northern hills of the 1,032-hectare island at Barangay Yapak are home to fruit bats, commonly referred to as flying foxes because their features resemble miniature dogs or foxes. 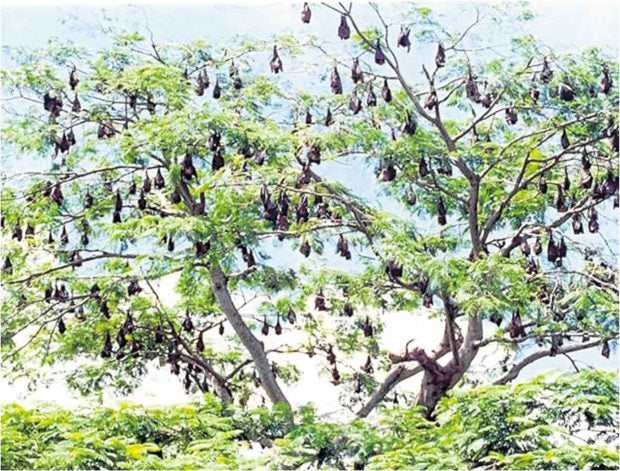 DISAPPEARING ATTRACTION The number of fruit bats, once a main attraction in Boracay, is dwindling due to construction and tourism activities, a conservation group says. —PHOTO COURTESY OF FRIENDS OF THE FLYING FOXES

Conservationists have identified three species of flying foxes on the island, including the golden-crowned flying fox (Aceradon jubatus), which is endemic to the country but has been categorized as among endangered species under the International Union for Conservation of Nature Red List.

The two other species are the giant fruit bat (Pteropus vampyrus) and the small flying fox (P. hypomelanus).

Bats are essential to the regeneration of trees and the preservation of fast-dwindling forest cover, FFF said.

In the letter, FFF president Julia Lervik asked the government to enforce a ban on the hunting and killing of bats.

FFF said development activities, including the clearing of trees, might have contributed to the sharp decline in the bat population in Boracay. It has been pushing for the declaration of the remaining forest cover in Yapak village as a critical habitat to ensure its protection.

“We need to stop anything that might cause us to lose even one more bat and collect data to support the reasons for this decline. A conclusive impact that will happen if we lose our bats or their numbers decline further is that we will have no potable water, as without the bats there will be no forest,” Lervik said.