Koreans have more businesses in Boracay than Chinese 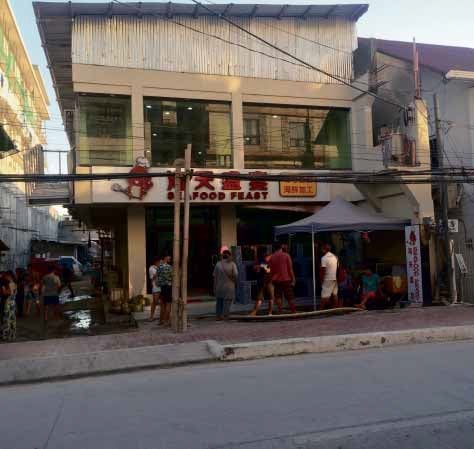 One of them, who co-owns a Chinese restaurant, said he was surprised by the reaction of the Filipino community in Boracay.

“There was no such reactions when the Koreans came . . . three to four years ago,” said the businessman, who spoke on condition of anonymity to protect his business.

The Koreans have actually “more establishments here and are diversified,” he said.

“Koreans are not only into restaurants but are also into hotels, health spas and massage parlors, bars, coffee shops, groceries, dive shops and other water sports and activities, and there are a lot of (Korean-owned) travel agencies,” the businessman said.

Boracay residents have been surprised by the proliferation of Chinese establishments, especially along the island’s main road.

Many have voiced objections to signs and menus only in Chinese.

Officials of Malay town in Aklan province, which include the three villages of Boracay, have said that they will require the foreign establishments to put up signs in English more prominently than Chinese and other languages.

Also speaking on condition that he would not be identified, another Filipino, who owns a Chinese restaurant here, said he did “not mind the increase of any type of business, as long as all of them adhere to the laws and requirements to become a legitimate business.”

He claimed that one Chinese restaurant was recently closed down by the local government because it had no permit although it had been operating for six months.

“It is unfortunate that the local government is not keen on implementing its own requirements,” the businessman said.

Singapore-born businessman Peter Taya, a longtime resident of the island, said it was normal for investors to put up businesses on the island due to the growing number of Chinese tourists.

Chinese tourists have become the island’s top foreign visitors over the the past several years.

Labor Secretary Silvestre Bello III earlier said the labor department was monitoring the Chinese establishments to ensure that they comply with labor laws, especially “if they hire foreign workers when there are Filipinos who are fit for these jobs.”

Workers and residents who were displaced by the six-month closure of Boracay Island last year lament the deluge of Chinese workers, many they suspect to be lacking the required work permits.

A group of residents said the proliferation of Chinese establishments employing Chinese workers was a sharp contrast to the situation of those who lost their livelihood during the closure of the island to tourists.

“We felt that we were treated like criminals and it is very difficult for us to go back to our livelihood and jobs until now. But there seems to be many Chinese establishments with Chinese workers who are usually paid higher for jobs that Filipinos can do,” Olive Abañera, coordinator of We Are Boracay, told the Inquirer in a telephone interview.

The group is composed of Boracay residents, mostly vendors, tricycle drivers, masseuses, tour guides and other workers in the informal sector.

Abañera said Chinese workers employed as cooks earn from P30,000 to P50,000 a month while their Filipino counterparts were receiving P500 per day.

“We also call on government agencies if these workers have complete working and other permits because there are those who only have tourist visas,” she said.

Rene Magtubo, Partido Manggagawa national chair, noted that most of the estimated 30,000 workers displaced by President Duterte’s closure of Boracay last year had not found new employment on the island.

“So we are concerned about reports that the Chinese-owned establishments have been exclusively hiring Chinese nationals as cashiers, cooks, waitresses, laborers and drivers,” Magtubo said.

He said this was a violation of Philippine labor regulations because these could be done by Filipinos.

“Now that Boracay is back in business, these workers should be reemployed as promised,” he added.

But Partido Manggagawa said it was not calling for the expulsion or deportation of Chinese workers.

The group also wants the labor department to include deputized representatives of labor groups in the plan to inspect establishments on Boracay and ensure compliance with labor laws and regulations by Chinese-owned shops and stores. —WITH A REPORT FROM TINA G. SANTOS