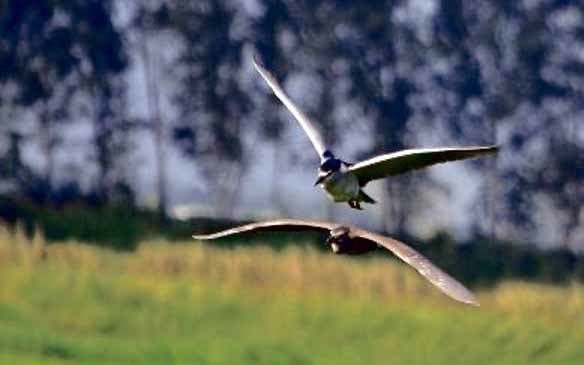 WETLANDS VISITORS Black-crowned night herons are among the hundreds of regular visitors to Candaba Marsh in Pampanga province. Development, however, has apparently come to Candaba and dried upmost of the wetlands that used to provide food and habitat for thousands of birds fleeing colder climes. —PHOTOS COURTESY OF GREGG YAN/BEST ALTERNATIVES

CANDABA, Pampanga, Philippines — It’s 5 in the morning and we’re on a cart, about to be pulled by an unusually large carabao. A jolt and we grunt, giggle and try to enjoy the bumpy ride along ponds and rice fields still shrouded in darkness.

Soon the dawn reveals a landscape teeming with birds. Hundreds of them.

In Candaba Marsh, a place I’ve visited regularly over the years, birds typically flit and fly by the thousands. Egrets and herons glide above basking bitterns. Shrikes jostle for choice trees. A soaring marsh harrier searches for breakfast.

But where are the rest of the birds? The hundreds of birds we are seeing are but a shadow of the thousands that used to darken the skies over the marsh.

Development has apparently come to Candaba and dried up most of the wetlands that used to provide food and habitat for thousands of birds fleeing colder climes.

Recently, however, a wetlands conservation group and its partner government agencies have come up with a community-based initiative to transform a portion of the marsh into a bird-watching haven, with farmers trained as guides.

The ecotourism program to be launched this year will feature bird-watching, carabao cart rides, wetland walks, Kapampangan delicacies and other attractions, while also increasing the income of farmers in the area.

Says Gaudencio de Leon, who has spent four decades tilling this land: “The land cannot stay still forever. Development is coming and the marsh is changing.”

He points at a clump of trees about half-a-kilometer away, saying: “Behind that was a fishpond where birds would catch tilapia, carp and catfish. It’s been sold and is being turned into a plantation. No more free fish.”

It’s an important “fuel station” or stopover for migratory birds flying from as far south as New Zealand and as far north as the frozen steppes of Siberia.

“Candaba Marsh once hosted hundreds of thousands of birds. A decade ago, we recorded up to 20,000 birds per visit, still just a shadow of what was,” laments Mike Lu, founding president of Wild Bird Club of the Philippines.

Because swamps are usually thought of as wastelands, they are often targeted for conversion, either for agriculture or industry.

The world’s wetlands have been in full retreat for a century, with an estimated 54 percent to 57 percent lost since the 1900s. 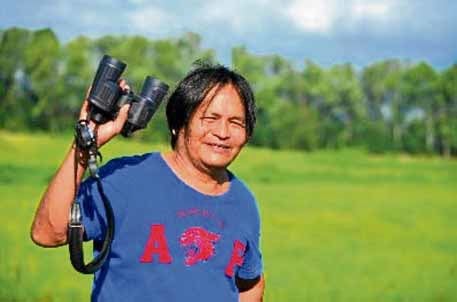 BIRD-WATCHING GUIDE Farmer Gaudencio de Leon will now be a bird-watching guide under a community-based initiative being planned by a wetlands conservation group and its partner government agencies.

“They provide habitats for many creatures while generating food and water for millions of people. In many ways, wetlands are the earth’s kidneys, filtering and purifying water.”

Peatlands in particular store a third of all land-based carbon yet occupy just 3 percent of the earth’s land area. When burned, they release massive amounts of carbon into the atmosphere.

In April last year, I was stranded on the Subic Clark Tarlac Expressway as a massive flood submerged portions of it. Both sides of the highway resembled a water world—a murky chocolate sea spanning the horizon.

The rains have been a boon to the farmers, says De Leon, president of the Macatagal Irrigators’ Association. “When the rains come in June, we become fisherfolk. We use nets to catch tilapia, marteniko, gourami, even janitor fish,” he adds.

He and his kin farm rice, watermelon and other crops from November to April, when the water recedes.

But the problem is that “portions of the marsh have been converted and drained. During El Niño years, the marsh dries up and farmers make do with minimal water,” Lu says.

For many farmers, the seasonal combination of farming and fishing is simply not enough.

To augment the income of farmers, conserve the wetlands of Candaba and save the birds, the Society for the Conservation of Philippine Wetlands (SCPW) and its partners, particularly the Ramsar Regional Center-East Asia and the departments of tourism, of agriculture and of environment and natural resources are developing a community-based initiative.

The initiative would transform a portion of the marsh into a bird-watching haven while also training farmers to be bird-watching guides to augment their income.

“For an activity to be sustainable, it has to pay for itself while also helping the locals,” says SCPW executive director Amy Lecciones.

Already, an ecotourism package is in the works that will feature tourist-oriented activities aside from bird-watching, with the launch scheduled this year.

The plan might yet prove that sometimes, the best way to save something is to make it indispensable.

Making birds critical to the income of farmers means developing them as strong allies against poachers and those who would do harm to their wetland homes. Properly done, ecotourism’s advantages can outweigh the lure of development.

“Now we can earn extra while ensuring that more Filipinos will keep enjoying the sights and sounds of Candaba,” De Leon laughs while gazing at flying egrets.

“Who would have thought our feathered friends can attract droves of tourists and improve our lives? Ang mga ibon pala ay talagang hulog ng langit (Birds are truly heaven-sent!),” he says. —CONTRIBUTED