Priest: Vote for officials who will protect the environment 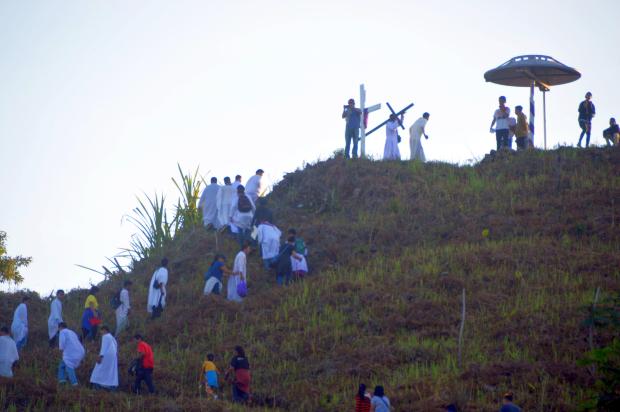 Catholics walk for six hours and climb the Dunque Hill, the highest peak in Misamis Oriental, in Barangay Upper Malubog in Manticao town, to commemorate the death of Jesus Christ, through the Stations of the Cross on Good Friday. (Photo by DIVINA M. SUSON / Inquirer Mindanao)

The hill, the highest peak in Misamis Oriental, is where the Catholic faithful have been holding the Stations of the Cross since 2015.

“It is the time when a Christian would not only meditate and pray for the forgiveness of sins but also to pray for the future,” he said.

One of the prayers he said was for voters, imploring that they would be guided choose candidates whose advocacy would be to take care of the environment.

Dunque Hill, about 26 kilometers away from Manticao town, rises around 2,600 feet above sea level, has been the site for Catholics here to remember the Passion of Christ for years now.

Located in Barangay Upper Malubog, the ascending steps of Dunque Hill are so steep and difficult they remind the faithful of the suffering of Christ.

Although accessible to four-wheeled vehicles, people — including tourists — use motorcycles to get here. 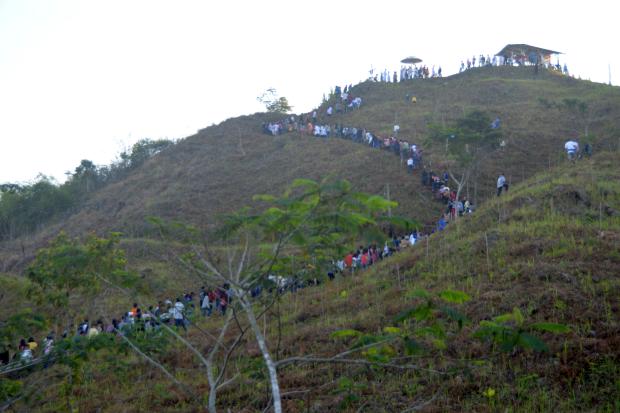 “There used to be no sense of sacrifice in the previous area where we used to hold the Via Crucis [Way of the Cross],” Datoy said.

He was referring to the main street of Barangay Tu-od, 10 kilometers away, near where their parish church stood.

“There used to be no meaning at all,” Datoy said. “Other devotees would not even reach the last station. You cannot feel even a little of what Jesus Christ did to save us.”

When the church first decided to set the Via Crucis on Dunque Hill, the Manticao municipal government sent two dump trucks to bring parishioners to the first station, around six kilometers away from the parish church.

From the first station, devotees will have to walk on the rough and hilly road to the next station, around 400 meters away.

From the 13th station, devotees will have to endure a 7-to-10 minute steep climb to the last station, where prayer will be said and a Mass would be celebrated.

“The parishioners assemble at the church as early as 2 a.m. on Good Friday, while others wait along the highway for the dump trucks to pick them up,” Datoy said, noting an increase in the number of devotees joining the activity on its third year.

Last year, a parishioner whose family owns a huge piece of land at Sitio Dunque donated a two-hectare part of the hill to the Archdiocese of Cagayan de Oro City, whose jurisdiction includes the Christ the King Parish in Barangay Tu-od.

Bernaby Ely, social action coordinator of the Archdiocese of Cagayan de Oro, recalled the “sea of clouds” that appeared while they were in the middle of the procession and the Mass on Good Friday a year ago.

“The sea of clouds appeared because there was a weather disturbance,” Ely said.

“The place is solemn and you can imagine the sacrifice of Jesus Christ as he went up Mt. Calvary, where he was crucified,” Datoy said.

Datoy expressed fear the solemnity would vanish if the plan of the Misamis Oriental provincial government to develop the nearby area into a tourist attraction would push through.

Several telecommunication towers are already being built on the hill.

He said voting for environment-friendly advocates would keep the Misamis Oriental peak intact.