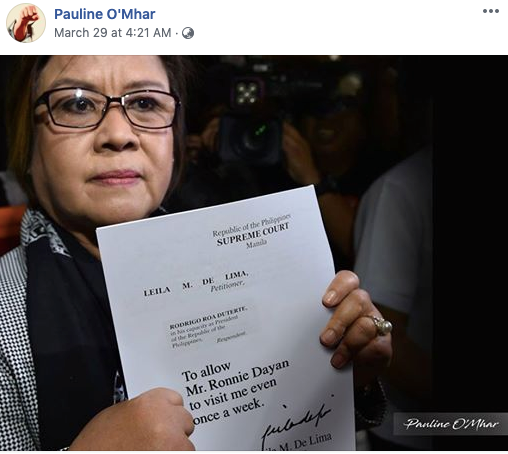 According to De Lima, the post made by the “purveyors of fake news” was “another malicious product of vengeful individuals who have been untiringly working to smear her good name and reputation.”

“It has come to my attention that another disinformation against me has been making the rounds on social media at a time when I have been speaking strongly against the Duterte regime’s indecency and moral bankruptcy,” she said in a statement.

“These paid purveyors of fake news are working double time to smear reputations, demonize critics of the administration, and propagate hate online for the benefit of no less than Mr. Duterte himself – the top source of fake news – and his minions,” she added.

The statement of De Lima stemmed to the March 29 post of several questionable Facebook pages that shared an altered image of her holding a document supposedly asking the Supreme Court “to allow [her former driver] Mr. Ronnie Dayan to visit me even once a week.”

However, De Lima said that the published photo was an altered version of an image originally published by global news company back in 2016, showing De Lima presenting before the media a copy of her petition for writ of habeas data.

“It really helps, as it becomes an imperative step nowadays, to verify the authenticity of articles or photos we encounter online before sharing them in our respective social media faces for the world to see,” she said.

“Very clearly, the photo of me that is now circulating online was altered and should be taken down by Facebook immediately,” De Lima added.

De Lima then believes that the administration cannot easily fool the Filipino public anymore given that “people are getting more and more exhausted and vigilant” against the rise of fake news.

“With the barrage of disinformation ahead of the elections in May, people have become more conscious and vigilant against groups and individuals peddling disinformation or fake news,” she said. “After all, no matter how blurred it gets, the world will always see the truth.” /je