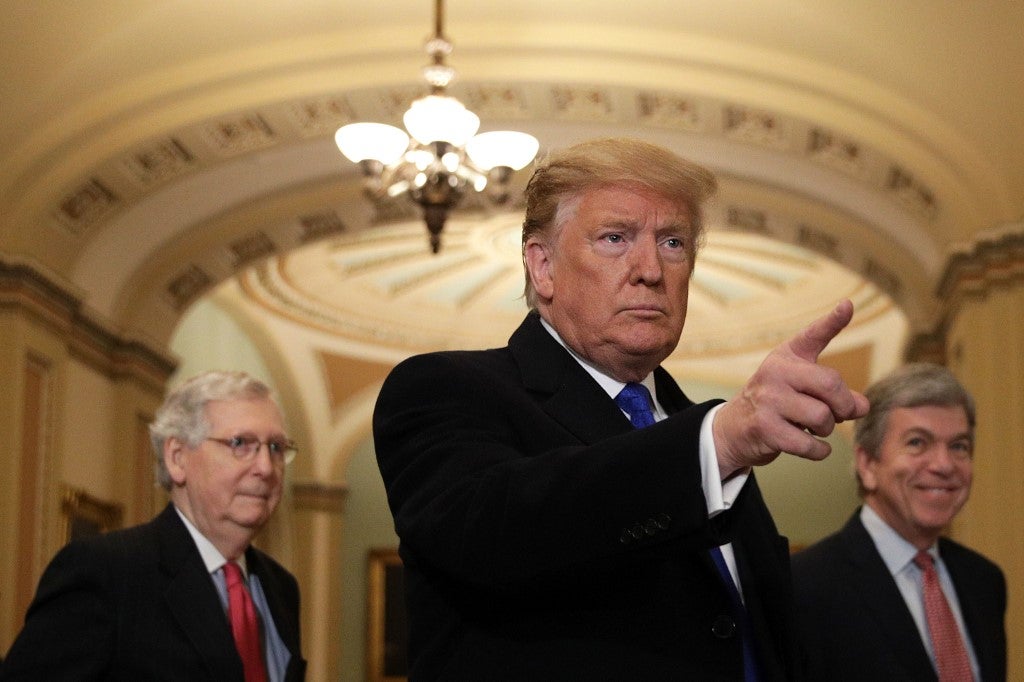 WASHINGTON — A seething President Donald Trump launched a tirade Friday against the “bullshit” Mueller report on how he tried to thwart the probe into Russian interference in the 2016 election, while a leading Democratic opponent urged his impeachment.

In early morning tweets, Trump called it “the Crazy Mueller Report” written by “Haters” and filled with statements that “are fabricated & totally untrue.”

Some of the statements, he said, “are total bullshit & only given to make the other person look good (or me to look bad).”

Crucially, the report stated that Trump’s election campaign never colluded with Russian meddling efforts, clearing the president of suspicions that he’d been in cahoots with the Kremlin.

But Trump, spending the Easter weekend at his Florida golf resort, is now digesting the report’s findings that he was happy to benefit from Russian dirty tricks and tried repeatedly to hamper Mueller’s investigation.

There was no let up for the president from opposition congressional Democrats.

Senator Elizabeth Warren, who is vying to become the Democratic candidate against Trump in 2020, tweeted that the Democrat-led House “should initiate impeachment proceedings.”

And House judiciary committee chairman Jerry Nadler issued a subpoena to try to force publication of still more documentation from Mueller, as well as the portions of the probe that were blacked out for legal or security reasons.

Although Mueller stated he was following Justice Department policy in not charging Trump with the crime of obstruction of justice, he laid out 10 instances where the president took steps in that direction.

As a result, Mueller said he could “not exonerate” him.

That statement was taken by Democrats as an invitation to pursue the president in Congress, while even a top Republican, Senator Mitt Romney, broke from party lines to say he was “sickened” by the report’s findings.

At minimum, the almost 450-page report — including scenes of a White House filled with lying, swearing and barely disguised panic — is deeply embarrassing for a president elected on a mission to clear Washington’s “swamp.”

Adding to its weight is the fact that the material is based largely on sworn testimony by Trump insiders, rather than rival politicians.

Whether the Mueller report has any immediate effect on the US political scene ahead of the 2020 elections, however, is uncertain.

With Republicans controlling the Senate, Democrats would have little chance of removing Trump through impeachment. For now, Warren is an outlier, with other senior Democrats shying away from the “I” word.

And Trump, who throughout the two-year investigation has claimed to be victim of a “witch hunt,” is using the latest uproar to cement his “us-against-them” appeal among a loyal right-wing support base.

He was also photographed by The Daily Mail in his limousine reading what appeared to be the front page of The Wall Street Journal, with coverage of the Mueller report release.

What’s sure is that publication of the Mueller report will not end the bruising fight.

In another tweet, sent after Trump had finished his golf outing, the president threatened to take revenge.

“It is now finally time to turn the tables and bring justice to some very sick and dangerous people who have committed very serious crimes, perhaps even Spying or Treason. This should never happen again!” he warned.

Nadler fired the first shot for the Democrats, announcing a subpoena requiring the Justice Department to hand over all redacted parts, as well as huge quantities of supporting evidence.

“Even the redacted version of the report outlines serious instances of wrongdoing by President Trump and some of his closest associates,” Nadler said.

“It now falls to Congress to determine the full scope of that alleged misconduct and to decide what steps we must take going forward.”

The Trump administration is likely to fight the subpoena, prompting a legal battle that could even go up to the Supreme Court.

Another powerful Democrat with subpoena power, House Intelligence Committee chairman Adam Schiff, tore into Trump, saying his campaign’s Russia contacts were at a minimum unethical and that Congress should now determine whether his obstruction attempts amounted to a crime.

“As I said some time ago, whether these acts are criminal or not…, they are unquestionably dishonest, unethical, immoral, and unpatriotic, and should be condemned by every American,” Schiff said.