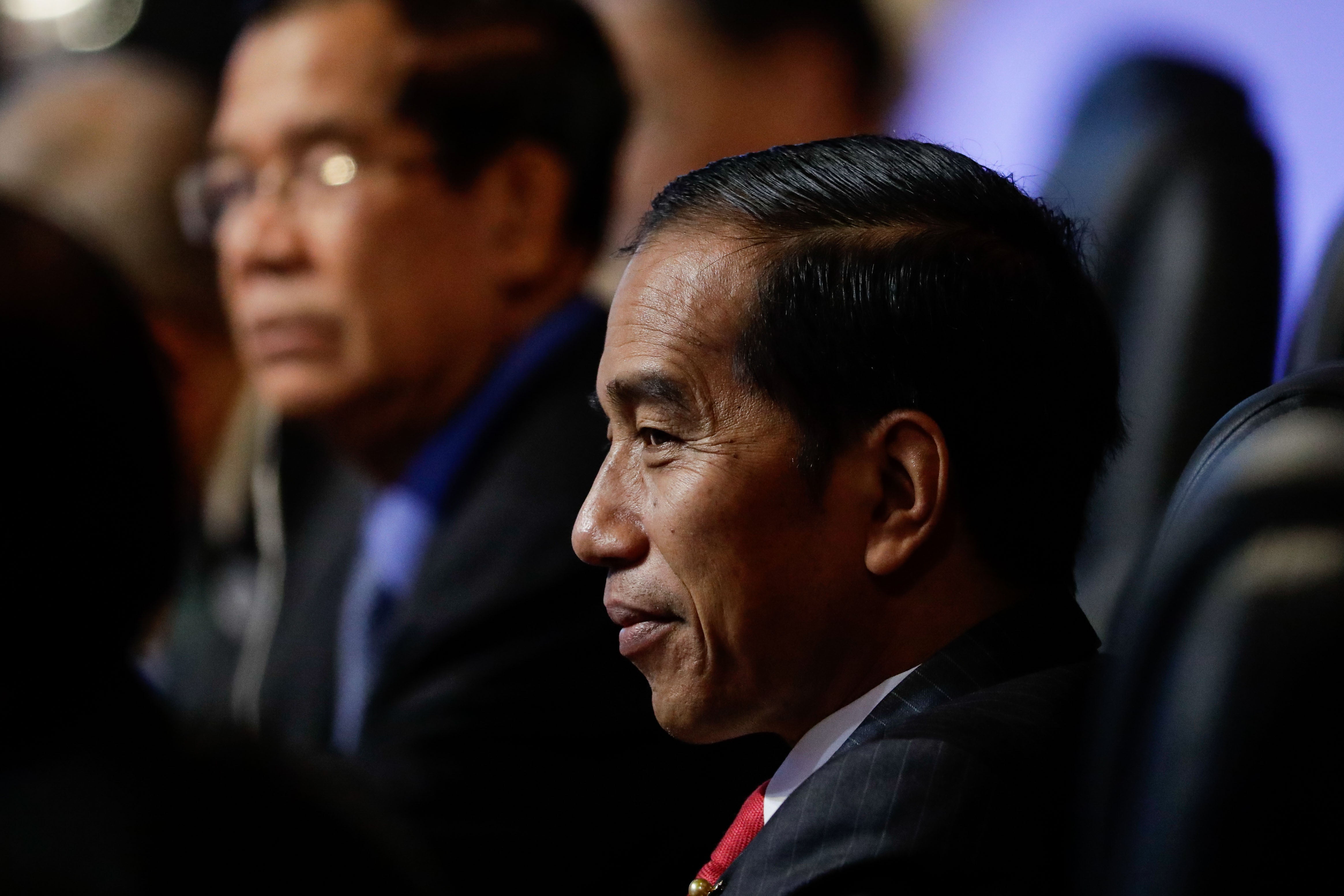 Indonesian President Joko Widodo looks on during the ASEAN Canada 40th Anniversary Commemorative Summit on the sideline of the 31st Association of Southeast Asian Nations (ASEAN) Summit in Manila on November 14, 2017.
World leaders are in the Philippines’ capital for two days of summits. / AFP PHOTO / POOL / Ezra ACAYAN

JAKARTA — Indonesian President Joko Widodo has won a second five-year term, preliminary election results showed Wednesday, in a victory for moderation over the nationalistic rhetoric of his rival, Prabowo Subianto.

Vote counts from five independent survey groups showed Widodo with a clear lead over Subianto, a general during the era of the Suharto military dictatorship who warned Indonesia would fall apart without his strongman leadership.

Indonesia, the world’s most populous Muslim-majority nation, is an outpost of democracy in a Southeast Asian neighborhood of authoritarian governments and is forecast to be among the world’s biggest economies by 2030. A second term for Widodo, the first Indonesian president from outside the Jakarta elite, could further cement the country’s two decades of democratization.

Addressing jubilant supporters a few hours after polls closed, Widodo said he was aware of his lead and called for the nation to reunite after the divisions of the campaign.

“From the indications of the exit poll and also the quick counts, we can see it all, but we must be patient to wait for the official counting from the Election Commission,” he said.

Subianto, who also lost to Widodo in the 2014 presidential election, had not yet conceded defeat. He said his campaign’s exit poll and quick count showed that he had won but urged his supporters not to cause chaos.

His campaign team has alleged massive voter list irregularities, but analysts said the claims are absurd and designed to undermine the election.

The balloting was a huge logistical exercise with 193 million people eligible to vote, more than 800,000 polling stations and 17 million people involved in ensuring the polls ran smoothly. Helicopters, boats, and horses were used to get ballots to remote and inaccessible corners of the archipelago.

Conservative opponents had tried to discredit Widodo, a furniture exporter whose political career started as a small city mayor, as insufficiently Islamic.

Widodo tried to neutralize the not-a-real-Muslim whispers with the selection of Ma’ruf Amin, the leading Islamic cleric in Indonesia, as his running mate, though he risked alienating progressive and moderate supporters.

Pre-election polls consistently gave a lead of as much as 20 percentage points to Widodo, widely known by the nickname “Jokowi.”

“I’ve voted for Jokowi because five years in office was not enough for him to complete his brilliant programs for infrastructure, health and education,” said Eko Cahya Pratama, 43, after voting in Tangerang on the outskirts of Jakarta.

“For me, this country is better to be managed by a man with a clean track record rather than a dirty one in the past,” he also said.

After the results became clear, hundreds of Widodo supporters marched through downtown Jakarta, some holding aloft a giant red and white Indonesian flag.

transit. The latter became a reality last month in chronically congested Jakarta with the opening of a subway.

A strident nationalist, Subianto ran a fear-based campaign, highlighting what he sees as Indonesia’s weakness and the risk of exploitation by foreign powers or disintegration.

His ultra-nationalist tactics preceded President Donald Trump’s polarizing rhetoric by several years and the party he founded in 2008, Gerinda, is officially known as the Greater Indonesia Movement. He has long been dogged by his dismissal from the military in 1998 after soldiers under his command kidnapped student activists, 13 of whom were never seen again.

Economic growth in Indonesia has been stable if unspectacular and inflation is low, maximizing the impact of poverty alleviation programs.

The U.N.’s Food and Agriculture Organization and other international agencies said earlier this month that the percentage of Indonesian children suffering from stunting — malnutrition that can result in lifelong physical and cognitive impairment — fell to 30.8% from nearly 38% between 2013 and 2018. /kga