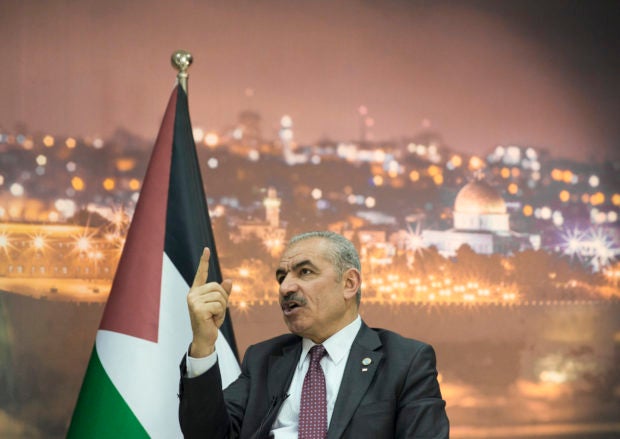 Palestinian Prime Minister Mohammad Shtayyeh italks during an interview with The Associated Press, at his office in the West Bank city of Ramallah, Tuesday, April 16, 2019. Stayyeh accused the United States of declaring “financial war” on his people and said an American peace plan purported to be in the works will be “born dead.” (AP Photo/Nasser Nasser)

RAMALLAH, West Bank – The new Palestinian prime minister on Tuesday accused the United States of declaring “financial war” on his people and said an American peace plan purported to be in the works will be “born dead.”

In his first interview with international media since taking office over the weekend, Mohammad Shtayyeh laid out plans to get through the financial crisis he has inherited and predicted that the international community, including U.S. allies in the Arab world, would join the Palestinians in rejecting President Donald Trump’s expected peace plan.

Shtayyeh, a British-educated economist, takes office as the Palestinian Authority, which administers autonomous zones in the Israeli-occupied West Bank, is mired in a financial crisis.

The Trump administration has slashed hundreds of millions of dollars of aid, including all of its support for the U.N. agency for Palestinian refugees.

Israel has meanwhile withheld tens of millions of dollars of tax transfers to punish the Palestinians for their “martyrs’ fund,” a program that provides stipends to the families of Palestinians imprisoned or killed as a result of fighting with Israel.

The Israelis say the fund rewards violence, while the Palestinians say the payments are a national duty to families affected by decades of violence.

Furious about the withholding, the Palestinians have in turn refused to accept partial tax transfers from Israel.

Without its key sources of revenue, the Palestinian Authority has begun paying only half salaries to tens of thousands of civil servants, reduced services and increased borrowing.

In a new report released Wednesday, the World Bank said the Palestinian deficit will grow from $400 million last year to over $1 billion this year.

“Israel is part of the financial war that has been declared upon us by the United States. The whole system is to try to push us to surrender” and agree to an unacceptable peace proposal, Shtayyeh said.

“This a financial blackmail, which we reject.” /gsg