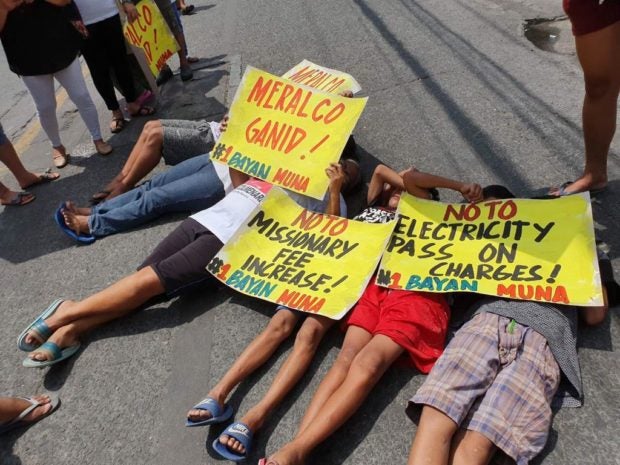 MANILA, Philippines — Members of the party-list Bayan Muna staged a protest Tuesday outside the Manila Electric Corporation (Meralco) office in Kamuning, Quezon City to denounce the possible rate hike that they said is due to issues hounding the Luzon grid.

Bayan Muna chair and senatorial candidate Neri Colmenares said the prices of electricity will surely increase even with assurances that the power supply is normal today because the Luzon grid has been on red alert for days.

(Even as they are now saying that the power situation in the Luzon grid is normal, the damage has been done. The rates will definitely increase.)

In a text message to INQUIRER.net, Meralco spokesperson Joe Zaldarriaga countered Colmenares’ argument, saying that discussing whether there will be a rate hike is premature. However, he also pointed out that there were instances in the past when power prices went up after supply problems.

“I think it is premature at this point to give a definite statement as to whether or not power rates will rise next month. We only partly source from the spot market, and we will need the actual and final billings from all our suppliers to make a final determination if power costs would indeed increase,” Zaldarriaga said.

“Historically, however, there were instances when power prices in the spot market registered an upward adjustment whenever there is a supply issue in the previous supply month,” he added.

The National Grid Corporation of the Philippines (NGCP) has placed the Luzon grid on red alert since Wednesday, as the shutdown of several power plants forced electric service providers to operate amid thinning power reserves.

(There has been a simultaneous breakdown of the Sual power plant, Calaca power plant, the Pagbilao power plant and even the Malaya thermal power since 2012, but there were also new ones breaking down like the SCPC, SLPGC at SLTEC.)

(It looks like they are making money from consumers by passing on different charges like missionary charges to them.)

Previously, Bayan Muna Rep. Carlos Zarate asked President Rodrigo Duterte to fix the power problem and order a review of the power supply agreements that the government has entered into.

Colmenares and Senator Sherwin Gatchalian, who heads the Senate committee on energy, also asked the Department of Energy to look into possible collusion among power producers and service providers. /ee