Notre Dame hailed as monument to the ‘best of civilization’ 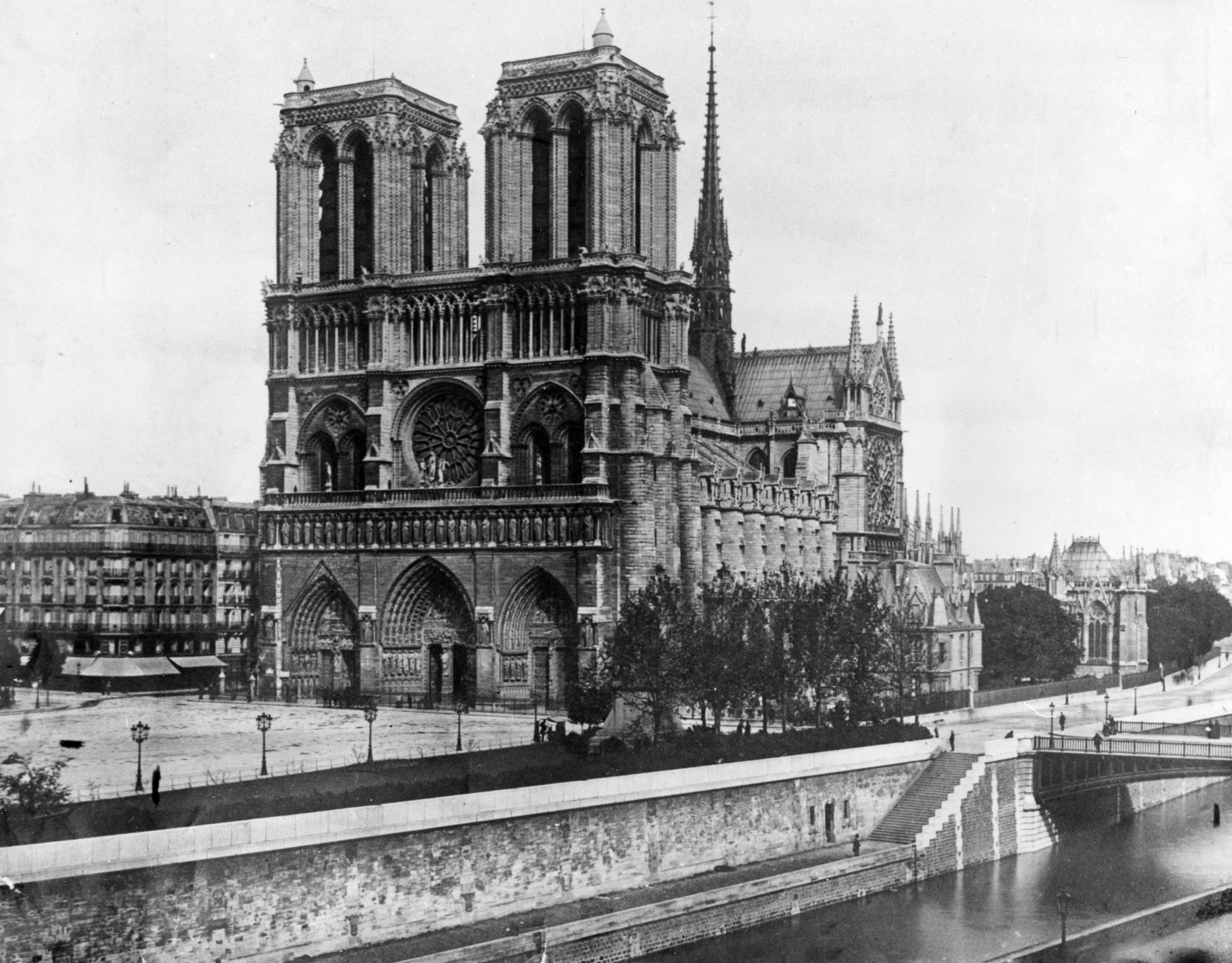 This 1911, file photo shows the Notre Dame Cathedral, on the island called Ile de la Cite in Paris. Art experts around the world reacted with horror to news of the fire that ravaged cathedral on Monday, April 15, 2019. One shell-shocked art expert is calling the beloved Gothic masterpiece ‘one of the great monuments to the best of civilization.’ (AP Photo/File)

NEW YORK — Notre Dame, a survivor of wars and revolutions, has stood for centuries as not merely the greatest of the Gothic cathedrals and a towering jewel of Western architecture.

It has stood, in the words of one shell-shocked art expert, as “one of the great monuments to the best of civilization.”

And so it was that across the globe on Monday, a stunned and helpless art world wept alongside the people of France as a massive fire ravaged the beloved cathedral.

“Civilization is just so fragile,” said Barbara Drake Boehm, senior curator at the Metropolitan Museum of Art’s medieval Cloisters branch in New York, her voice shaking as she tried to put into words what the cathedral meant. “This great hulking monument of stone has been there since 1163. It’s come through so many trials.”

“It’s not one relic, not one piece of glass — it’s the totality,” she said, struggling to find words expansive enough to describe the cathedral’s significance. “It’s the very soul of Paris, but it’s not just for French people. For all humanity, it’s one of the great monuments to the best of civilization.”

Boehm spoke shortly before the Paris fire chief announced that firefighters had been able to finally save the structure, including its two main towers. Much of the roof was destroyed.

The exact cause of the blaze wasn’t known, but French media quoted the fire brigade as saying it was “potentially linked” to a 6 million euro ($6.8 million) renovation project on the church’s spire and its 250 tons of lead. The Paris Prosecutor’s office, which was investigating, said it was treating it as an accident. 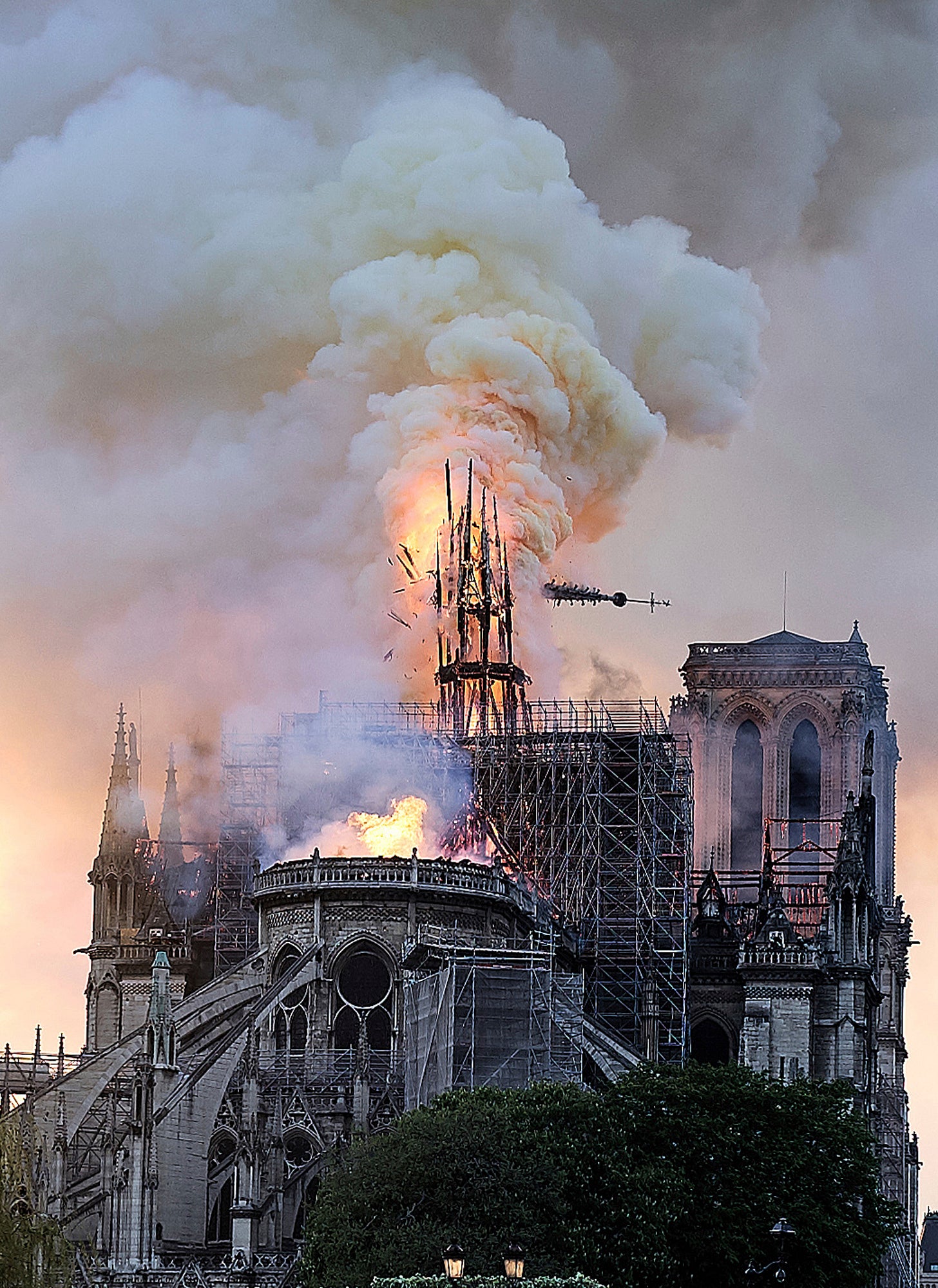 Flames and smoke rise as the spire on Notre Dame cathedral collapses in Paris, Monday, April 15, 2019. Massive plumes of yellow brown smoke is filling the air above Notre Dame Cathedral and ash is falling on tourists and others around the island that marks the center of Paris. (AP Photo/Diana Ayanna)

Construction on Notre Dame — French for “Our Lady” — began in the 12th century and continued for nearly 200 years. It sustained damage and fell into neglect during the French Revolution, but received renewed attention following the 1831 publication of Victor Hugo’s novel “The Hunchback of Notre-Dame.” This led to two decades of restorations, including the cathedral’s famous flying buttresses and a reconstructed spire.

While most kings were crowned elsewhere, Napoleon Bonaparte made sure he was crowned there in 1804, and married there in 1810.

“It all blends together so harmoniously,” said Nancy Wu, a medieval architecture expert and educator at the Met Cloisters.  She said she was struck by delicacy of the structure, as well as that in the three stunning stained-glass rose windows, and the elegant exterior carvings.

“There are a lot of details that remind one of intricate lace,” she said, “even though it’s a building of cold hard stone.”

Aside from the structure, art experts were concerned about the fate of countless priceless artworks and artifacts inside, including relics like the crown of thorns, which is only occasionally displayed. Paris Mayor Anne Hidalgo later said on Twitter that the crown of thorns and the tunic of St Louis were among the artifacts saved.

“This cathedral has a number of elements that are not just famous but religiously significant,” said Julio Bermudez, professor at the school of architecture and planning at Catholic University in Washington, D.C. “One of course is the crown of thorns … the faithful believe this is the crown that the Savior put on his head. It’s kept in a very safe place. But you know the fire is tremendously damaging.” Flames and smoke rise from Notre Dame cathedral as it burns in Paris, Monday, April 15, 2019. Massive plumes of yellow brown smoke is filling the air above Notre Dame Cathedral and ash is falling on tourists and others around the island that marks the center of Paris. (AP Photo/Thibault Camus)

He also expressed concern about the beautiful stained-glass windows, which he called “really irreplaceable.”

Those worried about the cathedral’s durability could, perhaps, take solace in one of Notre Dame’s more fascinating survival stories. In 1977, workers demolishing a wall in another part of Paris discovered 21 heads belonging to 13th-century statues from the cathedral. The kings of Judea, which were a prime example of Gothic art, had been taken from Notre Dame during the French Revolution and guillotined by antiroyalists who mistakenly thought they represented French kings.

The heads, which were thought to be lost, are now displayed in the capital’s Cluny Museum.

The mourning was not limited to the art world. Religious leaders, too, expressed deep sorrow over the devastation.

Cardinal Timothy Dolan, the archbishop of New York, said he was praying for Notre Dame, which he called “second maybe to St. Peter’s Basilica, (in) … the ability of a church to lift our minds and hearts back to the Lord.”

“For the French, my God, for the world, Notre Dame Cathedral represents what’s most notable, what’s most uplifting, what’s most inspirational about the human project,” he said.

Boehm, at the Cloisters, found herself thinking about how the cathedral is at once of the past, and of the present — a living, vibrant building, despite its age.