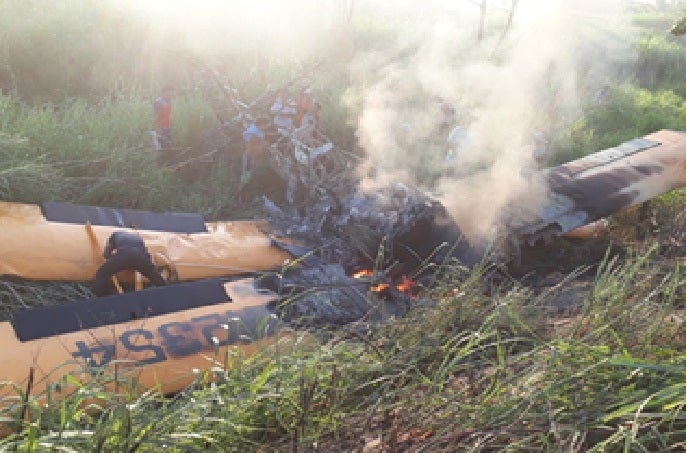 Photo of ill-fated chemical spraying plane on fire after it crashed on April 15 in Barangay Sigayan, Lambayong, Sultan Kudarat. CONTRIBUTED PHOTO from the Lambayong town police

TACURONG CITY – A pilot of a chemical spray plane survived a crash in a remote village in Lambayong, Sultan Kudarat while on a spraying mission Monday.

The plane was on an aerial spray mission over the Delinanas banana plantation in Datu Abdullah Sangki town of Maguindanao.

Luna said witnesses saw the plane suddenly go on fire upon impact but pilot Luciano managed to get out of the aircraft and was promptly rescued by local residents.

“Our investigation showed that the plane suddenly lost power and crash-landed in Barangay Sigayan,” Luna told the Inquirer.

“My own view is it could have been due to mechanical or human error but CAAP is the right agency to probe,” he said.

CAAP or the Civil Aviation Authority of the Philippines is set to investigate the crash, the second in Maguindanao and Sultan Kudarat this year.

On February 23, Capt. Dennis Pandi, the pilot of another spray plane operated by Davao Air Works, survived a crash in the banana plantation in Ampatuan and Abdullah Sangki towns.

The plane was spraying chemicals over Amardi Banana Plantation in Ampatuan-Abdullah Sangki when its engine malfunctioned, forcing it to crash-land in the middle of the plantation.

Pandi suffered minor injuries but the plane was a total wreck.