Battle of the scions shaping up in San Juan City 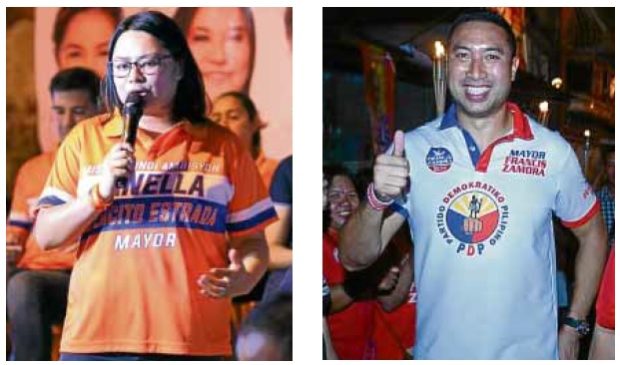 MANILA, Philippines — San Juan City is no stranger to battle, being the site of the opening salvo of the 1896 Philippine Revolution.

But more than a century later, the struggle for freedom has given way to a fight for control of the city, waged by the scions of San Juan’s two most prominent political families.

Incumbent Vice Mayor Janella Ejercito Estrada and former Vice Mayor Francis Zamora are locked in one of Metro Manila’s most closely contested races this May, for the city’s top post.

Listening to both, however, could give one the impression that they were running in two different cities.

Zamora, hoping to break the Ejercito-Estrada clan’s 50-year grip on the mayoralty, speaks of a city that has been left behind, besieged by a failing and ill-managed health care system, on top of a problem with informal settlers.

“In economics, there’s the law of diminishing returns. After 50 years, I believe a lot of people are now saying, ‘enough is enough,’” he told the Inquirer.

Estrada, the chosen successor of incumbent Mayor Guia Gomez who used to have a relationship with the former’s grandfather, Manila Mayor and former President Joseph “Erap” Estrada, sees a progressive, thriving city. She touts the rehabilitation of hundreds of drug users over her term as vice mayor. What in San Juan, she asked at a roundtable with reporters, needed to be changed?

The two disparate diagnoses of the city offer residents, who numbered 122,000 in the last census, a stark choice. It’s nearly identical to the one they faced in 2016, when Zamora first ran for mayor against Gomez after serving as her No. 2 for six years.

Zamora, 41, and his father Ronaldo, a nine-term congressman, were political heavyweights and reliable allies of the Estradas. But the highest rung of power in the city has been a strictly family affair, starting in 1969 with Joseph Estrada, then a movie star.

Zamora’s candidacy for mayor upended that, opening a fracture that divided the city. He ultimately lost to Gomez by just 1,224 votes. This time, he said, it’s a different ball game.

“My rival now is a lot younger and very inexperienced compared to a very seasoned Mayor Guia,” Zamora said. “It doesn’t follow that if you are a Guia supporter, you will be a Janella supporter. There’s no such thing as automatic carryover.”

Estrada, on the other hand, appears to be counting on exactly that. She could, in theory, use her age—29, a sharp contrast to the 76-year-old Gomez—to establish herself as a distinct, fresh face. But she’s betting that a message of continuity is what she needs to cross the finish line.

As she puts it, “the Estradas are well-loved in San Juan.”
Even her platform, the 10K program, is built on Gomez’s 7K program, with three additions—Kontra Droga, Karunungan and Kultura at Sining. It is the first—combatting illegal drugs—that she considers her signature accomplishment as vice mayor.

One of Zamora’s central proposals is turning San Juan into a “smart city” by establishing free Wi-Fi in its 21 barangays, and designing a phone app to facilitate communication between residents and city officials.

Both Zamora and Estrada have said they would prioritize shoring up San Juan Medical Center, where equipment and staff are on dangerously short supply, and ensuring free medicine for residents.

They also see the development of quality high-rise public housing units as the best solution to relocating informal settlers, given that space is an increasingly elusive luxury in the Metro’s smallest city.

But what San Juan lacks in size is compensated for in its huge footprint on national politics. The mayoralty has served as a launch pad for higher office, from former President Erap to son, former Senator Jinggoy, Janella’s father, and Gomez’s son, Sen. JV Ejercito.

While acknowledging that San Juan was the Ejercito-Estrada clan’s “kingdom,” Zamora said there were divergent factions he could use to his advantage. For instance, he believes he can get votes from residents who were upset that Jinggoy threw his hat into the Senate race, imperiling the chances of half-brother JV.

He also claimed to have the backing of the business community, which allegedly feared that an Estrada win might make Jinggoy San Juan’s “de facto mayor.”

“She still doesn’t have that experience, leadership and decisiveness that a mayor must have to lead a highly urbanized city,” Zamora said of his rival.

Estrada denied this, contending that her father and grandfather had groomed her for a life in politics. “I would go around with them as a kid. Even then, I told myself, ‘I like what they’re doing. When I grow up, I hope I’ll be like that, too,’” she said.

President Rodrigo Duterte, who overwhelmingly won in San Juan in 2016, casts a long shadow on the race. He backs Zamora while Estrada has Davao City Mayor Sara Duterte’s support.

But the shadow of the family patriarch, former President Erap Estrada, might be even longer.

“I told my grandfather when I first ran for councilor that I would do everything I could not to tarnish the family name here,” Estrada said.

“[Erap] will never allow any other mayor who is not a family member,” said Zamora, acutely aware of the former’s enduring imprint on the city. But, he added: “Times are changing.”