When 12-year-old Abdel Rahman Nofel was shot in the leg near the Gaza border, he thought he would never play football again.

But on an artificial pitch in the coastal enclave, the young amputee controlled the ball, leaned heavily on his crutches and took a shot. 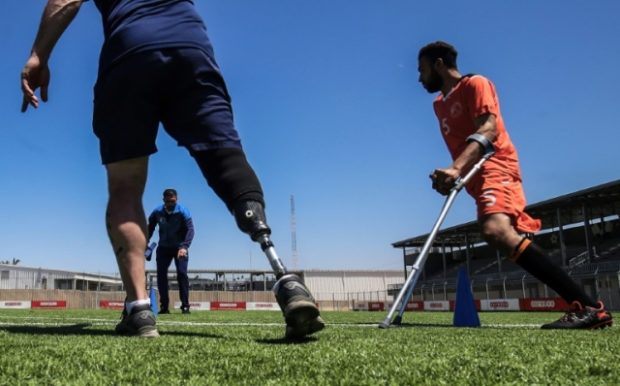 Gaza authorities say some 6,500 people have been shot by Israeli forces since March last year, many of them needing amputations. Image: SAID KHATIB – AFP

He is one of dozens of players preparing for kick-off Saturday in Gaza’s first football tournament for amputees.

More than 6,500 people have been shot by Israeli forces during a year of weekly mass protests along the Gaza border, according to Palestinian figures.

More than 125 have had amputations and many others are permanently disabled.

Nofel, the youngest in his team, said he was shot during a kick-about near where protestors were clashing with Israeli forces.

He was transferred to the occupied West Bank for treatment and eventually given an artificial limb.

“I hadn’t thought of playing again,” he said.

But his father received a phone call from a member of the team.

“They told him there’s a match for people with amputations,” Nofel said.

Gaza’s first football team for amputees pre-dates the protests, with most players either born disabled or losing limbs in the three wars between Israel and Gaza’s Islamist rulers Hamas.

But interest has grown strongly since the start of the protests.

Protestors launched weekly rallies in March 2018 demanding Israel lift its crippling blockade of Gaza and allow refugees to return to homes their families fled in the late 1940s as the Jewish state was born.

Some have burned tires and thrown rocks and explosive devices at Israeli forces, who have responded with live ammunition.

At least 264 Palestinians have been killed, along with two Israeli soldiers.

Israel has been widely criticized for what rights groups say is a heavy-handed response.

Simon Baker, head of the European Amputee Football Federation who was visiting Gaza to train the six teams taking part in Saturday’s tournament, said he aimed to keep politics out of his work.

“None of these players have talked about what happened to them and I haven’t asked them, because we are here to play football,” he said.

Baker, who himself lost a leg in a building site accident, said sport can help sufferers of trauma to recover.

“Any sport… is a great way to rehabilitate people and get people back into society,” he told AFP.

He was sweating after hours of training in the spring sunshine ahead of the event, backed by the International Committee of the Red Cross.

Israel has maintained a crippling blockade of Gaza for more than a decade, arguing it is necessary to isolate Hamas.

Critics say it amounts to collective punishment of the strip’s two million residents.

Coach Khaled al-Mabhooh, 32, said he was angered by the number of people injured in the protests.

Officials say the teams suffer from limited resources, including a shortage of high-quality crutches and a lack of sports fields in cramped Gaza.

But despite that, 27-year-old team captain Naji Naji, wounded during 2007 clashes, said participation had grown from a few players to six teams across Gaza.

“We are building a miracle,” he said. NVG

Wheelchair competition gets going at US Open