Plebiscite on splitting Palawan into 3 provinces set for 2020 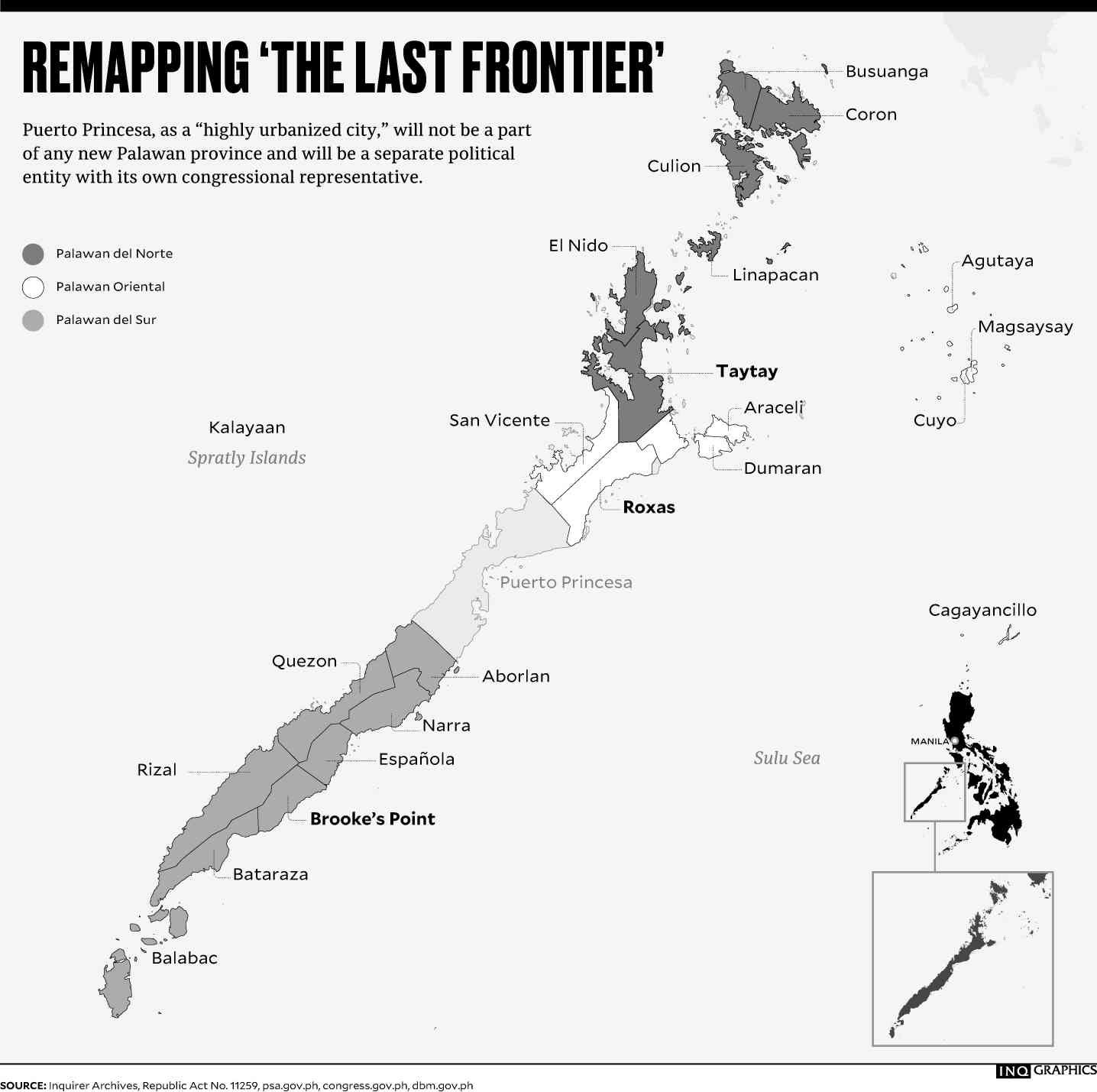 Palawan will not be a single province anymore, but only if the law dividing it into three is approved in a plebiscite.

President Rodrigo Duterte signed the law on April 5, but Malacañang made it public only on Saturday.

The plebiscite is set for the second Monday of May 2020. The new provinces would be created if approved “by majority of the votes cast by the voters of the affected areas.”

The law is unclear, however, on what will happen if majority in one of the proposed provinces votes against it.

Puerto Princesa City, the current capital, will not take part in the plebiscite or in future elections in any of the new provinces as it will have its own district representative.

Under the law, Palawan del Norte will be composed of Coron, Culion, Busuanga, Linapacan, Taytay and El Nido. Taytay will be its capital.

Brooke’s Point will be the capital of Palawan del Sur, which was designated as the “mother province” that will also include Aborlan, Narra, Quezon, Rizal, Española, Bataraza, Balabac and Kalayaan, whose only barangay is Pag-Asa Island in the South China Sea.

Each new province will have its own legislative district and will have a governor, vice governor and Sangguniang Panlalawigan.

The three provinces shall be entitled to equitable shares in the proceeds from the utilization and development of the national wealth within their respective terrestrial and maritime jurisdiction.

They will have a combined share of not less than 40 percent of the gross collection derived by the national government from mining taxes, royalties, fishery charges and other taxes or fees from the previous year and from its share in any coproduction in the utilization and development of national wealth within their territorial jurisdiction.

Kalayaan is part of the Spratly Islands, which are believed to sit atop natural gas and oil reserves.

Palawan Gov. Jose Alvarez was among those who lobbied for splitting the province into three, saying that would improve local governance and the delivery of public services and spur the island’s growth.

Another proponent of the division of Palawan, Winston G. Arzaga, who is a member of its provincial board and a former vice governor, said the clamor to divide the province started as early as the 1960s.

Writing in Inquirer.net in November last year, Arzaga said the “overriding reason” to divide the province was its huge size that made effective governance “a nightmare.”

According to Sen. Sonny Angara, who had endorsed the original House Bill No. 8055 to the Senate, Palawan is so big that its 17,000-square-kilometer area is five times the size of Batangas.

Palawan, which has a population of 1.1 million (including Puerto Princesa), also encompasses 1,800 islands, making it an archipelago within an archipelago.

The proposed measure met opposition from some civil society groups, which said it did not undergo proper consultation with the people of Palawan.

The House bill was passed on third reading in only five months after it was filed by the three representatives from the province. After it was handed over to them, the senators approved it  three months later.

Puerto Princesa City Mayor Lucilo Bayron had said he and other city officials had declined an invitation by the law’s proponents to take part in the division campaign. He said the bill would lead to the downgrading of Puerto Princesa as a component city or being chopped up into smaller towns.

In 2012, Republic Act No. 10171 reapportioned the province of Palawan into three legislative districts from the previous two. —WITH A REPORT FROM INQUIRER RESEARCH