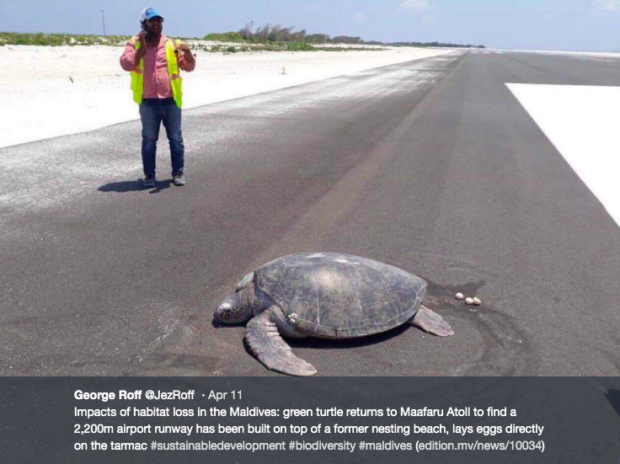 MANILA, Philippines — Green turtles are among a few animals that take a long journey back to their natal place to breed.

But what happens when their birth site has been turned into something no longer fit for nesting?

In the Maldives, a female sea turtle’s homecoming wasn’t at all welcoming. The beach where it was born is now an airport.

Without a choice as its biological nature dictates it lays eggs on the same shore it emerged as a hatchling,  the sea animal made the runway its nest on Maafaru island, local news website The Edition on Tuesday reported.

“Despite the unfortunate circumstances that befell the turtle mother, she is reportedly in good health and was released back into the ocean by locals,” wrote The Edition.

The incident has sparked fresh debates on the ecological and social costs of the South Asian nation’s tourism-propelled growth.

“The question remains on how much of Maldives’ biodiversity must be sacrificed in order to propel our country forward industrially and economically,” the website said.

The Maldives Underwater Initiative blames resorts for the decline of the turtles’ grazing areas.

“We’re not just seeing the loss of the green sea turtle’s nesting habitat in #Maldives, resorts are also removing #seagrass that these turtles eat,” the marine biology team said in a tweet. A green turtle consumes about two kilograms of seagrass a day.

The Maafaru International Airport,  which has a 2.2 kilometer-long and 40 meter-wide runway, was inaugurated in August last year. The $60-million project bankrolled by the United Arab Emirates was built on Maafaru, one of the inhabited islands of Noonu Atoll, which is a traditional nesting site of the marine turtles.

Green turtles leave their nests as hatchlings and head into the ocean. They rarely return to land. When they reach sexual maturity, they travel long distances to go back to their natal place to mate and lay eggs.

Scientists say this natal homing process is largely linked with the animals’ association of safety and suitability to their birthplace as a breeding ground.

Of the seven species of sea turtles in the world, five can be found in the waters around the Maldives,  a tropical nation in the Indian Ocean consisting of 1,192 low-lying small coral islands and sandbanks. The green turtle and the hawksbill are the more visible species.

The International Union for Conservation of Nature (IUCN) has placed the green turtle (Chelonia mydas) on the list of endangered species of animals.

There is no clear estimate of its population but the IUCN said its number could have dropped by more than 50 percent over the past decade.

Human encroachment, habitat loss, meat and egg trade, domestic and industrial pollution and commercial fishing are among the major threats to the green turtles existence.

Impacts of habitat loss in the Maldives: green turtle returns to Maafaru Atoll to find a 2,200m airport runway has been built on top of a former nesting beach, lays eggs directly on the tarmac #sustainabledevelopment #biodiversity #maldives (https://t.co/CEjc1wHivD) pic.twitter.com/gQXktsJCVQ