US to China: We’ll operate wherever international laws apply 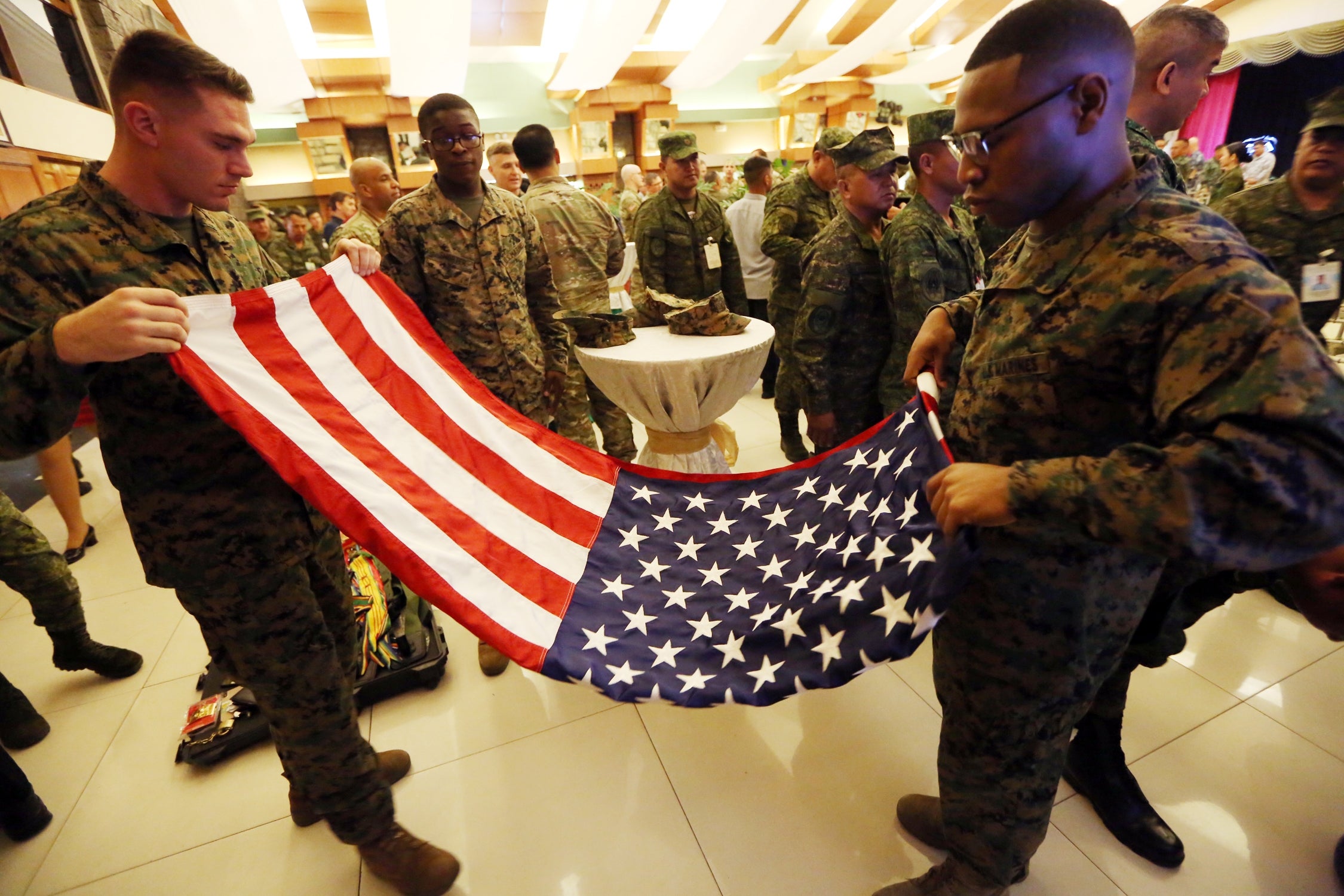 TILL NEXT YEAR US Marines fold the American flag during the Balikatan closing rites on Friday in Camp Aguinaldo.—NIÑO JESUS ORBETA

This was the “simple truth” from US III Marine Expeditionary Force commanding general Lt. Gen. Eric M. Smith, the military official overseeing the participation of US warship USS Wasp in this year’s Balikatan exercises, when asked for his reaction on China’s warning to “nonregional states” not to stir trouble in the disputed West Philippine Seas.

The 35th annual Philippines-US military exercises, which ran from April 1 to 12, apparently caught China’s attention as they included for the first time the USS Wasp warship which was carrying F-35 fighter jets in the exercises in the disputed seas.

The exercises also included a scenario dealing with the recapture of seized air bases, amid the backdrop of China’s aggressive construction of military bases on artificial islands in the disputed seas.

But Philippine and US military officials were quick to deny that these exercise scenarios were to flex muscle at China or were aimed at any specific threat.

“The presence of US forces in the West Philippine Sea were all part of the Balikatan…[and] is not really [meant] to agitate or anything else, but purely for training,” Lt. Gen. Gilbert I. Gapay, the Balikatan director for the Philippines this year, told a press conference following the exercises’ closing ceremonies on Friday in Camp Aguinaldo, Quezon city.

Gapay explained  that the air base seizure exercise scenario was part of counterterrorism training.

This year’s joint exercises saw the participation of 4,207 personnel from the Philippine military, 3,500 from the United States and members of the Australian Defense Forces as observer.

Smith added that the only country the USS Wasp presence was meant for was the Philippines, and as part of good will.

“That’s all I have on us; we brought everything we could bring because our partnership with the Philippines is so good. This is a great partnership and a mutually respectful, beneficial partnership, so I bring everything I can because I get so much out of this training,” Smith said.

“People will always read into any training exercise, that this was directed at them. [But] this is just a fictitious exercise… I wouldn’t read too much into it,” Smith said.

In Gapay’s speech during the closing ceremonies, however, he said the exercise  scenarios also dealt with maritime security and territorial defense, “requiring initially a unilateral action from the Armed Forces of the Philippines, and eventually a bilateral defense action by both the Philippines and United States forces.”

“The exercise was able to promote the message of the national leadership’s thrust of having an independent foreign policy with our allied nations,” Gapay said, without delving into specifics.