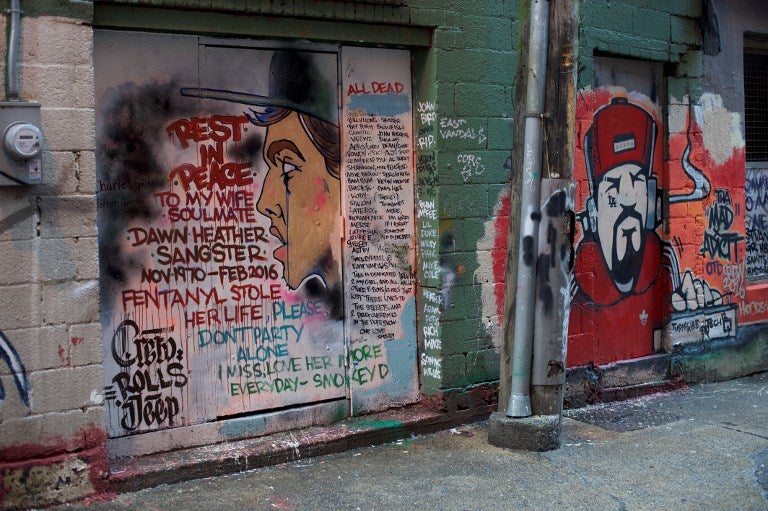 A mural in an alley in Vancouver’s Downtown Eastside, on December 21, 2016, painted by a man mourning the fentanyl overdose death of his wife, with names of other victims of the crisis. More than 10,000 Canadians have died of opioid-related overdoses since a public health crisis erupted in 2016, according to new data released Wednesday, April 10. 2019.

OTTAWA, Canada – More than 10,000 Canadians have died of opioid-related overdoses since a public health crisis erupted in 2016, according to new data released Wednesday.

The latest figures — 3,200 deaths in the first nine months of 2018 — show that the powerful painkiller fentanyl remains “a major driver of this crisis,” the public health agency said in a statement.

“Today’s newly released data are a stark reminder of the importance of maintaining and increasing our efforts to end the epidemic of opioid overdoses in Canada,” Chief Public Health Officer Theresa Tam said.

But the crisis is now also striking people who became addicted to prescribed painkillers before turning to street drugs and others experimenting with recreational drugs for the first time.

The provinces of Alberta, British Columbia and Ontario continue to be the hardest hit but the opioid epidemic has affected every part of the country.

Three-quarters of the most recent victims were male, and the vast majority of deaths were among young and middle-aged adults.

Authorities have stepped up efforts to try to curb the number of opioid deaths, such as widely distributing naloxone kits to treat overdoses.

Ottawa proposed an additional Can$30 million (US$22 million) in funding to fight the epidemic in its latest budget, which is before parliament.

But the annual death toll has continued to rise. /cbb