Duterte net satisfaction rating up by 6 points in Q1 2019 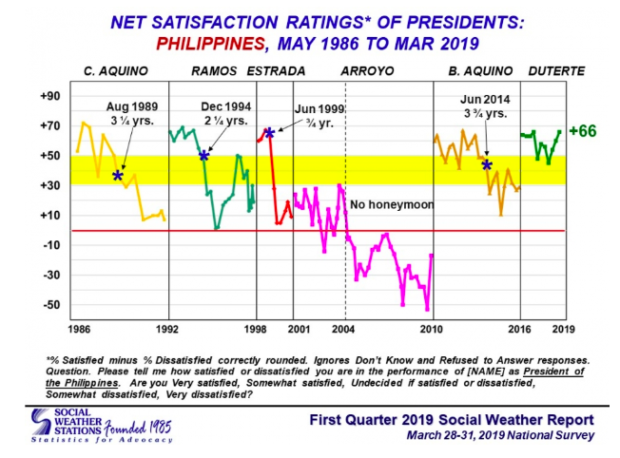 The survey, conducted from March 28 to 31, found that 79 percent of adult Filipinos were satisfied with Duterte’s performance, a five percent increase compared to the December 2018 survey where the president scored a satisfaction rating of 74 percent.

Fewer people were also dissatisfied with Duterte’s performance at 13 percent, a 2 percent decline from 15 percent in December 2018.

SWS said the increase in Duterte’s net satisfaction rating was due to a 15-point increase in Mindanao, as well as increases in other parts of the country —  Visayas (7 points), Balance Luzon (4 points),  and Metro Manila (3 points).

Duterte retained his ‘excellent’ performance in Mindanao after recording a new record-high net satisfaction rating of +88, which is one point higher than his previous high of +87 in March 2017.

The president, meanwhile, scored a ‘very good’ rating in the Visayas, Metro Manila, and Balance Luzon at +69, +61, and +56, respectively.

Duterte’s net satisfaction rating also increased in the rural areas; in classes A, B, C, and D; among men and women; in all age groups; and in all educational levels.