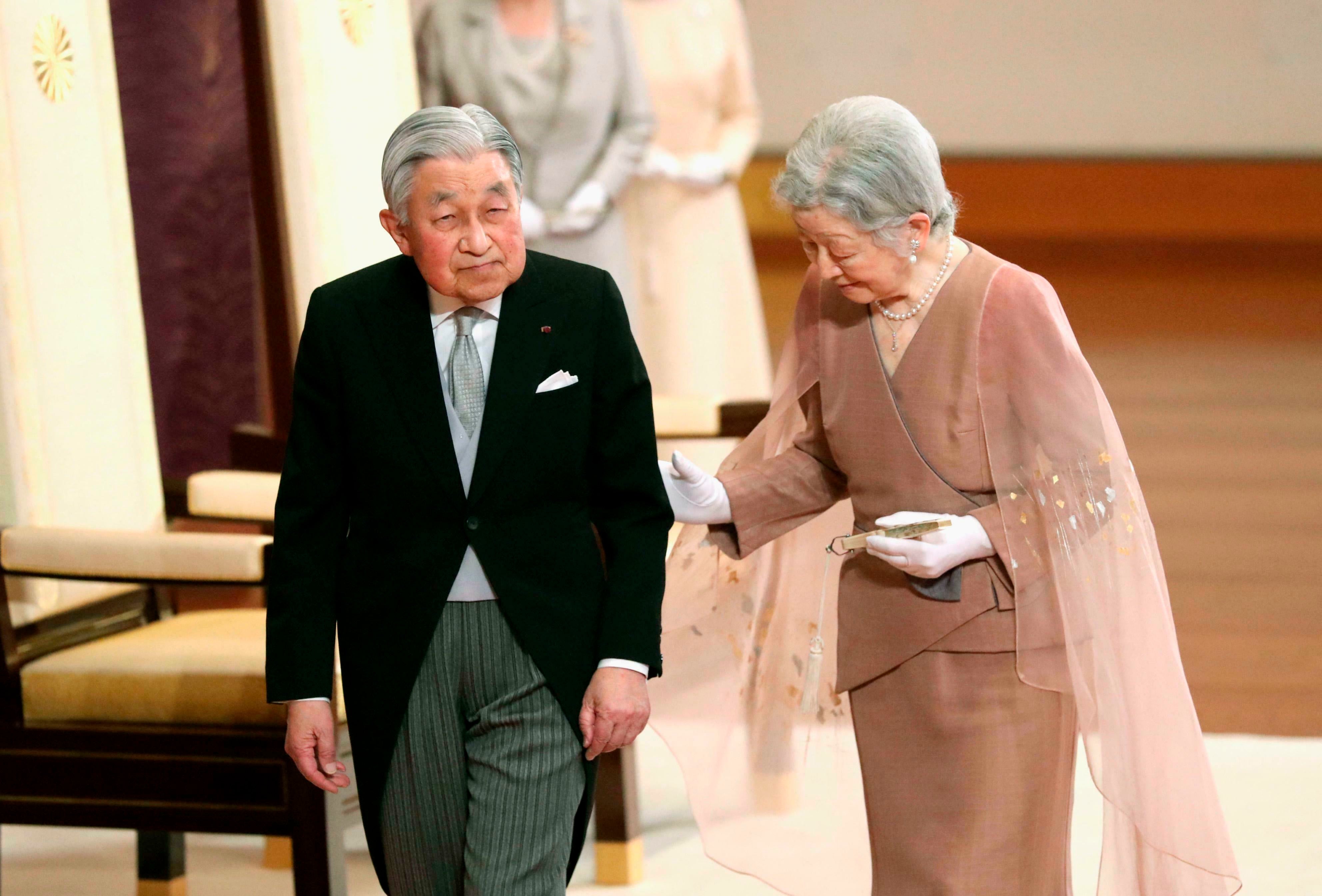 Japan’s Emperor Akihito, left, and Empress Michiko, right, leave after the celebration ceremony of their 60th wedding anniversary at the Imperial Palace in Tokyo, Wednesday, April 10, 2019. (Kyodo News via AP)

The couple met at a 1957 tennis tournament remembered as a “love match.” Akihito and Michiko Shoda married on April 10, 1959, making him Japan’s first future emperor to wed a commoner and someone who was Catholic-educated. Both are among many changes he brought to Japan’s 1,500-year-old monarchy.

Akihito and Michiko broke with tradition, especially in choosing to raise their three children, in speaking far more often to the public, and making amends for the war victims in and outside the country as he kept searching for what his constitutional role of “a symbol” should be.

Unlike their predecessors, Akihito and Michiko are almost always together — Akihito kneeling beside Michiko speaking intimately with disaster victims at evacuation centers, or to residents at nursing homes or a handicapped people’s workshop. Their friendly interactions have won deep affection among the Japanese.

That is now known as the “Heisei” style, after the name of Akihito’s era — the opposite of a more charismatic, invisible and deified emperor that conservatives want to restore from Japan’s militaristic past, experts say. Akihito succeeded the throne in 1989 after the death of his father, Hirohito, the longest serving emperor whose 64-year reign spanned World War II and Japan’s postwar economic recovery.

In his birthday remark in December, Akihito thanked the people for accepting and supporting him, especially Michiko for her years-long dedication and understanding for his role.

“Looking back, it was soon after I embarked on my life’s journey as an adult member of the Imperial Family that I met the Empress. Feeling a bond of deep trust, I asked her to be my fellow traveler and have journeyed with her as my partner to this day,” Akihito said.

“I am also truly grateful to the Empress, who herself was once one of the people, but who chose to walk this path with me, and over 60 long years continued to serve with great devotion both the Imperial Family and the people of Japan,” Akihito said, with his voice trembling with emotion.

As emperor, Akihito has also made unprecedented visits to the Philippines and other Pacific islands conquered by Japan that were devastated in fierce fighting as the U.S.-led allies took them back. Though the emperor has avoided outright apologies, he has subtly stepped up his expressions of regret in carefully scripted statements on the war.

Akihito and Michiko visited all of Japan’s 47 prefectures at least twice and traveled to 36 countries.

Wednesday’s celebration is their last in Akihito’s 30-year reign. The 85-year-old emperor is abdicating on April 30 and handing the Chrysanthemum throne to his elder son, Crown Prince Naruhito, 59, the next day.

During the ceremony at the palace, Naruhito and his wife, Crown Princess Masako, and other royal family members congratulated Akihito. He wore a tuxedo and Michiko a light-purple long dress. The couple will have an anniversary dinner with their three children and their spouses at the palace later Wednesday. /kga