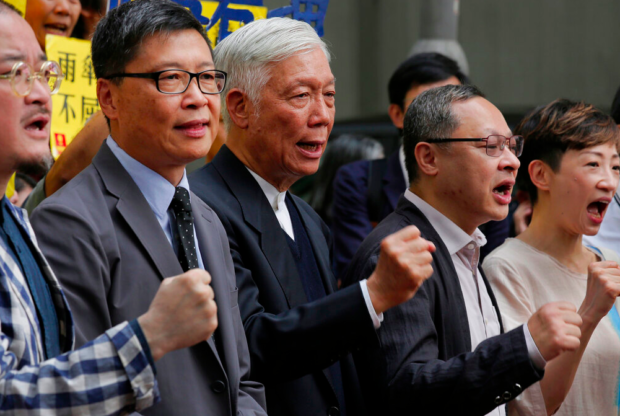 The guilty verdicts handed down Tuesday against the nine were condemned by rights activists as a likely sign of increasing restrictions on free expression in the semi-autonomous Chinese territory.

The defendants will be sentenced April 24.

The nine were leaders of 2014’s nonviolent “Occupy Central” campaign, also known as the “Umbrella Movement” after a key symbol of defiance against police adopted by the street protests that shut down parts of the financial hub for 79 days.

Protesters demanded the right to choose Hong Kong’s own leader rather than merely approve a candidate picked by Beijing but failed to win any concessions from the government.

Ranging in age from their 30s to 70s, the nine defendants span generations of Hong Kong citizens who have been agitating for full democracy. The defendants had all pleaded not guilty, calling the prosecutions politically motivated.

The charges carry a maximum penalty of seven years.

The former British colony was handed over to Chinese rule in 1997 under an agreement in which China promised it could retain its own laws, economic system and civil rights for 50 years.

However, Chinese president and Communist Party leader Xi Jinping has been seen as extending his crackdown on civil liberties to Hong Kong, drawing criticism from commercial and legal associations as well as political, human rights and media groups. /ee