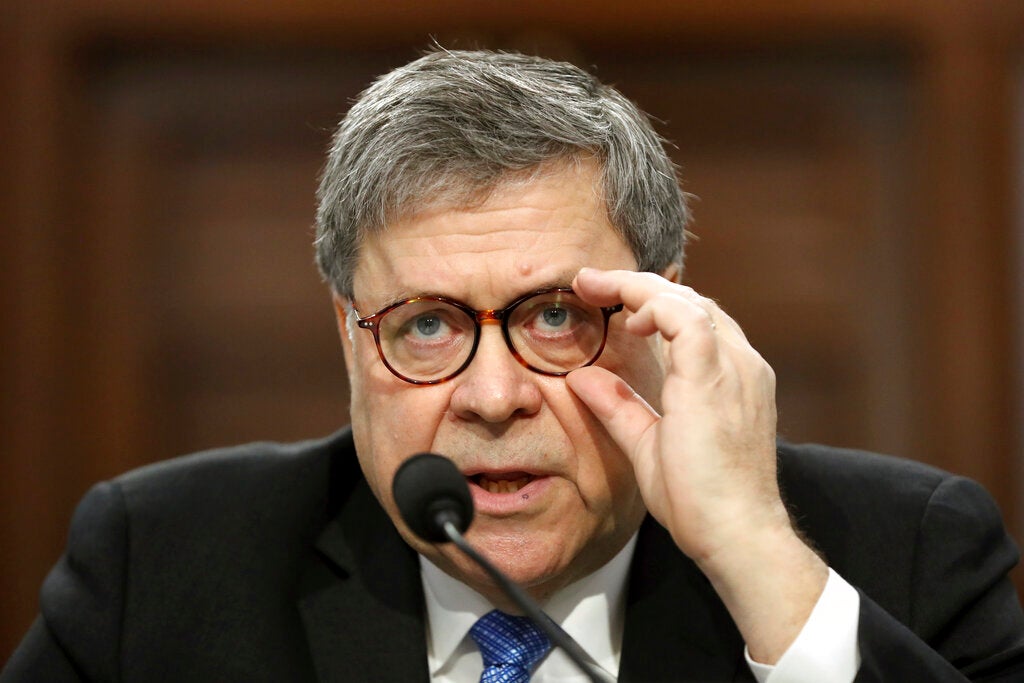 In his first appearance on Capitol Hill since taking office, and amid intense speculation over his review of special counsel Robert Mueller’s Russia report, Attorney General William Barr appears before a House Appropriations subcommittee to make his Justice Department budget request, Tuesday, April 9, 2019, in Washington. (AP)

WASHINGTON — Attorney General William Barr told Congress Tuesday he expects to release his redacted version of the special counsel’s Trump-Russia investigation report “within a week,” while Democrats criticized his handling of the long-awaited document and demanded he turn it over in full.

Barr bluntly defended his dealing with the report and said portions must remain hidden to comply with the law. He said he could be open to eventually releasing some of the redacted material after consulting with congressional leaders, but maintained he had no plans to seek a judge’s approval to disclose grand jury material. Democrats, he said, were “free to go to court” on their own to ask for it.

House Judiciary Committee Chairman Jerrold Nadler said he could issue subpoenas “very quickly” if Robert Mueller’s report is released with redactions after Democrats failed “to reach an accommodation with the attorney general under which we would see the report and the underlying evidence.” He said of Barr: “He has been unresponsive to our requests.”

The attorney general appeared before a House appropriations subcommittee to discuss his department’s budget request — normally a sleepy affair — but Democrats, in particular, were more interested in asking questions about the report. While opening the hearing, subcommittee Chairman Jose Serrano of New York called it “the elephant in the room.”

Barr wouldn’t discuss the substance of the special counsel’s investigation into possible connections between Russia and Donald Trump’s 2016 presidential campaign, but he did explain some of what to expect when the report is released: He said the redactions will be color-coded and accompanied by notes explaining any decisions to withhold information.

“This process is going along very well and my original timetable of being able to release this by mid-April stands,” Barr said.

Congress, the White House and the American public have been anxiously waiting for Barr to release the report since special counsel Mueller concluded his investigation and sent it to the attorney general more than two weeks ago. Justice Department officials are scouring the nearly 400-page document to remove grand jury information and details relating to pending investigations, among other materials.

Democrats say they will not accept any redactions.

At Tuesday’s hearing, Democrats said they were concerned that a four-page summary letter of the report’s main conclusions Barr released last month portrayed the findings in an overly favorable way for President Trump. The letter said that Mueller did not find a criminal conspiracy between Russia and Trump associates in the 2016 campaign, and that Barr did not believe the evidence in the report was sufficient to prove the president had obstructed justice.

Barr said “the letter speaks for itself” and revealed that he gave Mueller an opportunity to review the letter but the special counsel declined.

Rep. Nita Lowey, the Democratic chairwoman of the full Appropriations Committee, said she was taken aback that Barr had reduced Mueller’s report to a four-page letter in just two days. “Even for someone who has done this job before, I would argue it’s more suspicious than impressive,” Lowey said, referring to Barr’s first tenure as attorney general in the early 1990s.

Barr said, “I felt I should state bottom-line conclusions, and I tried to use special counsel Mueller’s own language in doing that.”

Asked about reports that members of Mueller’s legal team were unhappy with his handling of the report, Barr said he suspected any discontent may have reflected their desire to put out more information.

Across the Capitol, Senate Majority Leader Mitch McConnell said he had no concerns with the handling of the report: “I think it really comes down to a question of whether you trust Bill Barr or not. And I do.”

Barr said in the summary released last month that Mueller did not reach a conclusion on whether the president obstructed justice, instead presenting evidence on both sides of the question. Barr said he and Deputy Attorney General Rod Rosenstein decided that the evidence was insufficient to establish obstruction.

Facing the intensifying concerns from Democrats that he may have whitewashed Mueller’s findings, Barr has moved to defend, or at least explain, his handling of the process since receiving the special counsel’s report. He said in a March 29 letter that he did not intend for his brief summary of Mueller’s main conclusions to be an “exhaustive recounting” of his work.

He is likely to be asked to further explain himself at a Senate Appropriations subcommittee hearing Wednesday, though it’s unclear how much more he will say. At one point in the House hearing, he tried to cut off any more questions on the subject.

“I’m not going to discuss it any further until after the report is out,” he said.

Barr said he would elaborate at hearings scheduled by the House and Senate Judiciary committees at the beginning of next month.