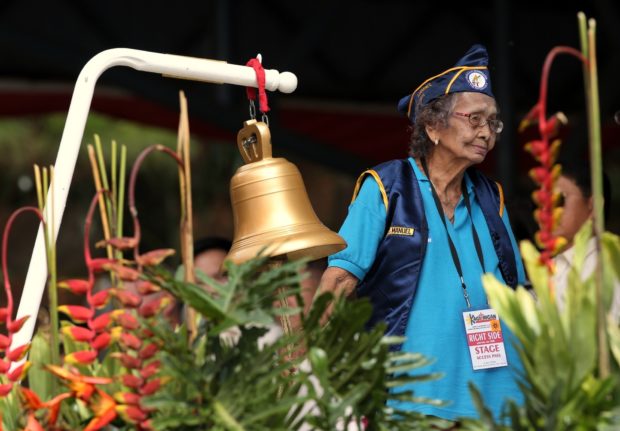 MANILA, Philippines — President Rodrigo Duterte on Tuesday reminded Filipinos “to remain steadfast … in upholding the country’s sovereignty and in protecting the rights and freedoms that people enjoy today.”

The President skipped the 77th Araw ng Kagitingan rites at Mt. Samat National Shrine in Bataan on Tuesday morning, but was expected to lead the Day of Valor rites at Camp Teodulfo Bautista in Barangay Busbus, Jolo, in the afternoon.

April 9 is a national holiday that honors the valor and courage of Filipino and American soldiers who fought against the Japanese during World War II.

In Pilar, Bataan, Vice President Leni Robredo called on Filipinos to draw inspiration from veterans, and urged them to stand up against “invaders and an abusive regime” to honor the memory of these heroes.

Interior Secretary Eduardo Año meanwhile said that the President had ordered the Philippine Veterans Affairs Office to speed up the release of P50 million monthly financial assistance to World War II veterans to help with their medical expenses.

For their part, activist lawmakers observed the Day of Valor with a protest rally at China’s consulate offices in Makati City, with Rep. Ariel Casilao of Anakpawis urging Filipinos to oppose “[Chinese imperialism] sealed with its political dictates on the present administration.”

Rep. Arlene Brosas of Gabriela said her group would fiercely resist “Chinese incursions into Philippine waters and one-sided economic agreements,” while Rep. Sarah Elago of Kabataan described their protest as a slap in the face of the Chinese government, “which has long been taking our natural resources for its own interest.”

In Cebu City, labor groups took to the streets to express their frustration over the administration’s failure to fulfill its promise to end contractualization and provide better wages.

“The real heroes of our country now are the laborers. Without them, the economy will be affected,” said Jaime Paglinawan, chair of Bayan-Central Visayas.

Read Next
2019 budget may be signed before Holy Week
EDITORS' PICK
On Day 2 of implementation, gov’t says workers now exempt from ‘no vax, no ride’ policy
Over 3 Million worth of prizes to be won at Smart Padala’s SENDali Manalo Promo!
Acer starts the year off strong with the Aspire Vero National Geographic Edition
Gear up and get ready to play with Yamaha Mio Gear
Metro Manila posts lowest temperature yet this ‘amihan’ season at 19°C
DOH: 28,471 new COVID-19 cases in PH; active cases now 284,458
MOST READ
Cold-case investigation names surprise suspect in Anne Frank’s betrayal
Derek Ramsay on being married to Ellen Adarna: ‘Gumaan ‘yung mundo ko’
Czech anti-vax singer dies after deliberate infection
Emma Stone calls Andrew Garfield a ‘jerk’ after he ‘lied’ about his ‘Spider-Man: No Way Home’ appearance
Don't miss out on the latest news and information.