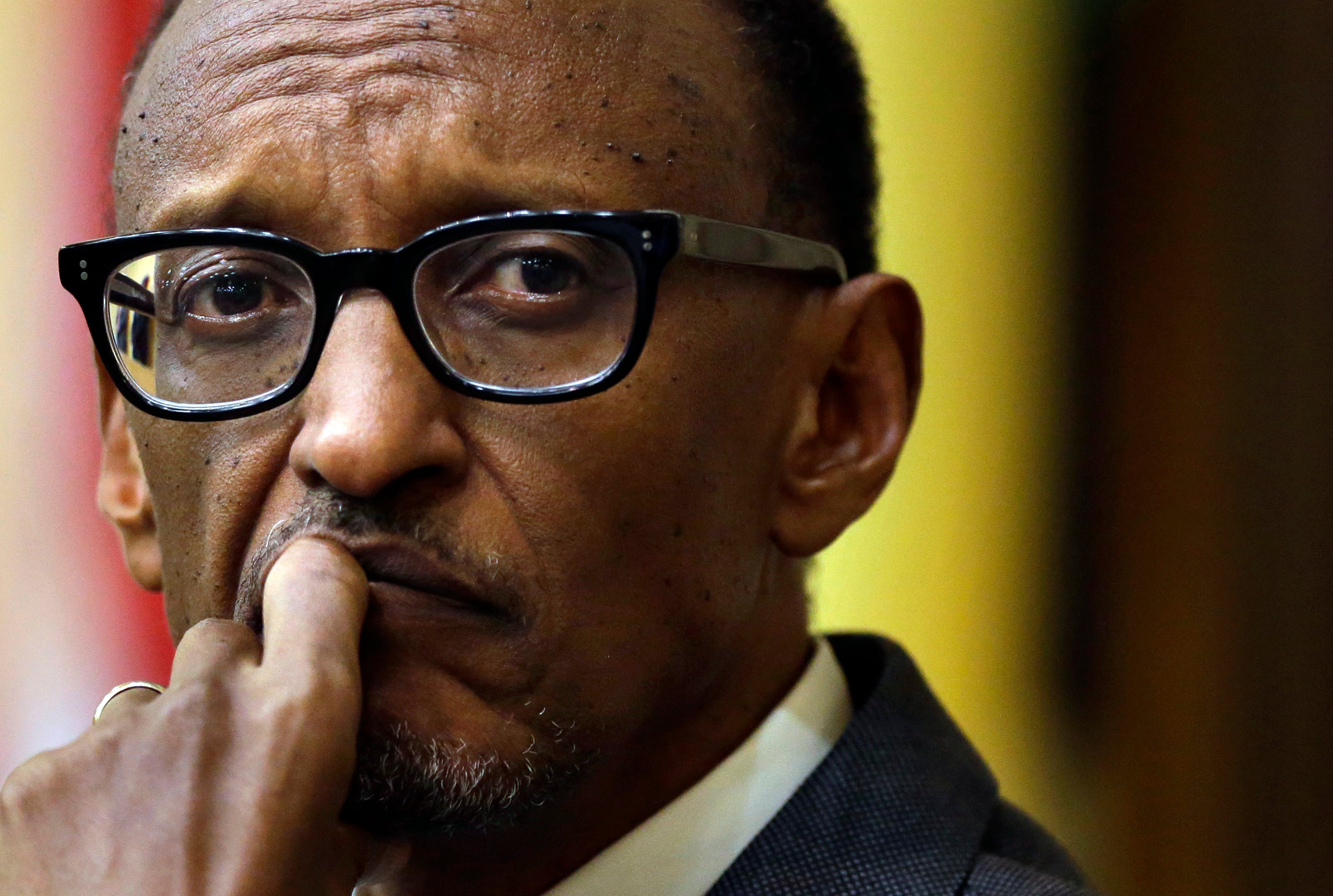 In this April 22, 2014, file photo, Rwanda’s President Paul Kagame listens to a question while participating in a panel discussion on the campus of Tufts University, in Medford, Mass. As Rwanda commemorates the 25th anniversary of the genocide Sunday, April 7, 2019, with yet more somber festivities, Kagame remains a constant figure atop Rwandan politics. (AP Photo/Steven Senne, File)

KAMPALA, Uganda — A quarter-century after Rwanda’s brutal genocide, President Paul Kagame remains a constant figure atop the country’s politics, feted by those who say it needs his visionary leadership and loathed by others who see a firm authoritarian with a malicious streak.

Kagame is so little-questioned that he speaks openly about the apparent assassinations of opponents. That fear factor keeps him in power, critics said, even as he embraces a global reputation as the man who helped bring an end to the mass killings of some 800,000 ethnic Tutsis and moderate Hutus, and who has brought stability to the East African nation.

In a speech last month, Kagame spoke dismissively of the crime that launched his reputation as a hard-liner: The 1998 killing of exiled opposition leader Seth Sendashonga, a fierce Kagame critic, who was gunned down in the streets of the Kenyan capital, Nairobi.

Referring to the assassination, widely believed by Kagame’s opponents and rights activists to have been carried out by a Rwandan hit squad, Kagame said he had little to say. “But I am also not apologetic about it,” he added.

It was vintage Kagame, who has been Rwanda’s de facto leader since his rebel group seized power by force, ending the 100-day genocide that began on April 7, 1994. He has been president since 2000, and could rule until 2034 following changes to the constitution.

Now 61, Kagame shows no signs of giving up power.

A darling of the development community, Kagame is lauded by some as a driver of economic growth that has lifted many Rwandans from poverty, bringing improved health care and education. He has also pushed for more women in political office, and 64% of the lawmakers in Rwanda’s parliament are women, the highest percentage of any country in the world.

But for many others he is the architect of an authoritarian regime that has stamped out virtually all opposition in Rwanda as opponents are jailed, flee, disappear, or are killed under mysterious circumstances.

“There is absolutely no room for dissent within Rwanda,” said British writer Michela Wrong, who is researching a book on the country. “You agree, you accept Kagame’s supreme power, or you leave.”

Rights groups decry what they describe as rampant violations that include the arbitrary detentions of street children and other poor people as part of an unofficial government program to hide “undesirable” citizens from view, according to Human Rights Watch. Street vendors, many of them women, have been among the main targets, it said.

Amnesty International cited a “climate of fear” before Kagame was re-elected to a third term in 2017, a vote that the president described as “a formality” after the most serious challenger was prevented from running and later jailed.

Even government programs ostensibly aimed at forging national unity are criticized by opponents as tools to more tightly control society.

The U.S. State Department, which describes Rwanda as “a constitutional republic dominated by a strong presidency,” also cites the problem of impunity among civilian authorities and the security forces.

Still, Rwanda’s government remains a major recipient of U.S. and other foreign aid despite persistent allegations of abuses — a fact that has been sharply criticized by Kagame’s opponents. Some analysts have long noted that Western remorse over failure to stop the genocide allows Rwanda a measure of goodwill from benefactors who would act tougher with a similarly repressive regime.

Olivier Nduhungirehe, Rwanda’s deputy minister of foreign affairs, told The Associated Press that those complaining about human rights “should keep quiet,” as Rwanda marks 25 years since the genocide.

“We can’t say that everything is perfect, of course,” he said, of concerns voiced by some exiles, who say they are afraid to return home. “But reconciliation is a reality for the past 25 years.”

Some critics who have fallen out with the president, including senior ruling party members once seen as Kagame allies, have fled into exile, where safety isn’t always guaranteed.

British police have warned two prominent Rwandan dissidents of the threats to their lives posed by Rwanda’s government. Similar warnings have been issued to dissidents elsewhere in Europe.

In South Africa, an inquest continues into the death of former Rwandan spy chief and Kagame critic Patrick Karegeya, who was found strangled in a Johannesburg hotel in 2014. Kagame has denied his government had anything to do with the killing but warned that those who betray their country will “pay the price.”

Jean-Marie Micombero, a former army major who broke with the Kagame government and who has lived in exile in Belgium since 2011, said that 25 years after Rwanda’s genocide, the country has yet to truly heal from its violent past.

“Under Kagame’s leadership Hutus and Tutsis are forced to live together,” said Micombero, a Tutsi. He called for new leadership that would “work in the areas of truth and justice in the context of a broken society. … There cannot be reconciliation without truth and justice.”

One group in exile that is leading the opposition against Kagame includes former members of Rwanda’s ruling party.

Outlawed in Rwanda as a terrorist group and accused of running rebel cells in eastern Congo, the Rwanda National Congress denied the allegations and said it is working toward “a united, democratic, and prosperous nation inhabited by free citizens.”

The group’s Johannesburg-based leader, former Rwandan army chief Gen. Kayumba Nyamwasa, has been the target of multiple assassination attempts that he blamed on Kagame.

But, said Wrong, the British author and journalist: “The level of invective Kagame dedicates to the Rwanda National Congress, the amount of energy he has expended trying to get Uganda and South Africa to expel or extradite or close down these players, suggests he sees them as a real threat.”

“These individuals were once incredibly close to Kagame, they know exactly what makes him tick,” Wrong said. “I think it’s a case of fearing no one quite so much as a former brother-in-arms.” /kga