Experience Europe in the Philippines as EU launches “Viva Europa 2019” 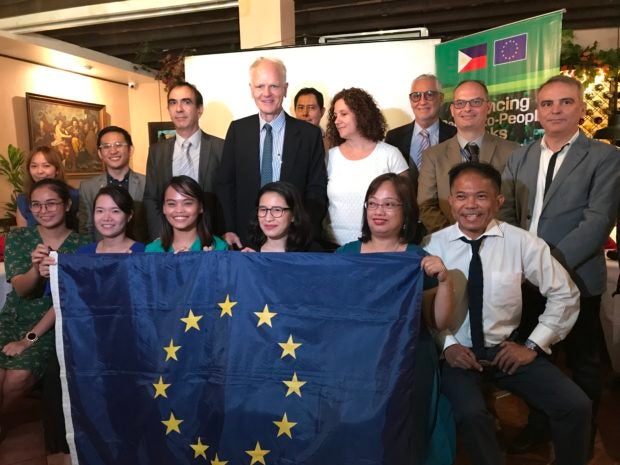 EU Ambassador Franz Jessen (center) with cultural officers and attaches of embassies of EU member states during the launching of “Viva Europea 2019” in Makati City. Photo by Daphne Galvez / INQUIRER.net

The European Union (EU) on Monday launched its annual summer cultural festival in the Philippines to bring European culture and heritage to Filipinos.

“Viva Europa 2019,”  will run from April to June, featuring  exhibitions, bike tours and concerts, among others.

“What we’re trying to do is trying to move away from our usual way of working in Manila, when we’re often focused on political issues, economic issues, and global issues,” Jessen said in a press conference in Makati City.

“We’re trying to bring Europe closer to the hearts of the people in Manila and in the Philippines. We do that by bringing some of the things where Europe is strongest. That, of course, is European culture,” he added.

It is also in coordination with Alliance Francaise, the British Council, the Goethe-Institut, Instituto Cervantes and the Philippine-Italian Association.

This year’s “Viva Europa” will hold its first stargazing event and a session on stars and constellations for the youth in line with its theme “EU Goes Techno.”

On May 6- 7, the EU will also hold a bike tour in Bohol in a bid to promote protecting the environment and practicing a sustainable lifestyle.

A one-day football festival, the Schuman Cup, will be held in May 4 in Ayala Alabang to help educate disadvantaged Filipino children about football and the way it is played in Europe.

European diplomats will also be competing with Filipino professional players.

The EU delegation, with Museo Pambata and embassies of Austria, Czech Republic, Germany, Netherlands, and the Philippine-Italian Association, will also hold story-telling activities for disadvantaged children, giving them the opportunity to hear European stories, games and other cultural activities.

In introducing the music of Europe to the Philippines, the EU will stage the “Euro-Pinoy Concert,” featuring  performers from the Czech Republic, Germany, Spain and the Philippines, including Czech composer Lukas Sommer, Spanish flamenco guitarist Alex Alcaraz, Filipino percussionist Jean Paul Zialcita, and half-German, half-Filipina DJ Marie Badkiss at The Ruins of Poblacion in Makati City.

A nationwide choir competition at the Far Eastern University will also be held from May 25 to 26.  / gsg

Read Next
Kin of ‘Negros 14’ bury their dead:  ‘We hope they will have justice’
EDITORS' PICK
Motostrada expands by handing over ‘Trident’ and adding new ‘Horseman’ to its growing business
WATCH: Hidilyn Diaz lifts ‘lifetime PR’ in back squats
Digital hunt for Hyun Bin: 5 challenges for Smartees
Water remains our saving grace right now
What’s next for ABS-CBN’s franchise bid?
ABS-CBN denies sending ‘emissary’ to bribe solons on network franchise
MOST READ
‘Nouveau’: Agot Isidro hits Jinkee Pacquaio’s show of luxury Hermes, Louis Vuitton bikes
Solon withdraws support for ABS-CBN franchise renewal
‘I will always speak up for you’: Server on defending Fil-Am family from racist rant
What’s next for ABS-CBN’s franchise bid?
Don't miss out on the latest news and information.