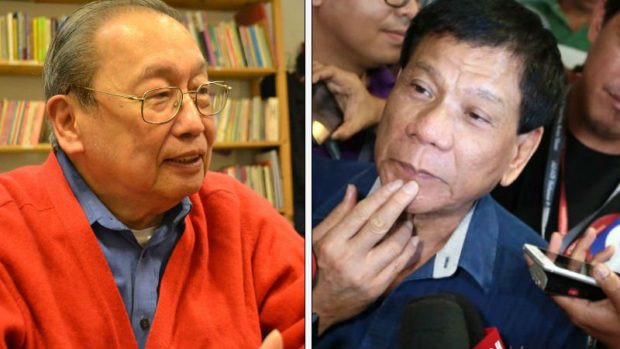 Jose Maria Sison (left), the founder of the Communist Party of the Philippines, was a professor of President Rodrigo Duterte in college. (File photos from the Philippine Daily Inquirer)

LUCENA CITY – President Rodrigo Duterte could not escape command responsibility for extrajudicial killings linked to his war on drugs, as he has apparently incited the police and military to kill suspects, according to exiled Communist Party of the Philippines (CPP) founder Jose Maria “Joma” Sison.

Recently, Sison noted, the President even said that he had ordered the military to form an assassination team.

In a statement issued on Sunday, April 7, from Utrecht in The Netherlands, Sison said: “Duterte once more incriminated himself before the International Criminal Court (ICC) by publicly inciting and ordering his military and police minions to engage in the murder of supposed suspects, as in the killing of 14 farmers in Negros on the mere suspicion that they belong to or support the NPA [New People’s Army].”

“By openly urging his armed minions to engage in assassinations, he cannot escape command responsibility,” he added. “His only possible defense before the ICC is that he is mentally deranged.”

In August last year, activists and the families of eight victims of the President’s war on drugs, who were represented by the National Union of People’s Lawyer, filed a complaint before the ICC based in The Hague.

It was the second petition accusing the President of murder and crimes against humanity in relation to his campaign against illegal drugs.

On Thursday, April 4, the ICC started its preliminary examination on the complaint.

The first petition was filed by lawyer Jude Sabio in April 2017, citing the “continuing mass murder” in the Philippines as shown by the thousands of Filipinos killed in the anti-criminality and anti-drug campaigns that began when the President was still mayor of Davao City.

The ICC started its preliminary investigation of the first complaint in February last year.

On Saturday, the President said he had instructed the military to “learn the art of assassination” to counter the NPA’s liquidation squad, also known as “Sparrow Unit” — as the Special Partisan Unit, or Sparu, of the NPA, is commonly known.

“If NPA has Sparrow, why don’t we have one? So I told them, ‘Form a unit, target the NPA,’” Duterte said in his speech at the National Federation of the Motorcycle Clubs of the Philippines’ annual national convention in Iloilo City.

Sison said the President was wrong in comparing government soldiers to the NPA rebels.

“He is absolutely wrong in comparing his armed minions to the revolutionary squads of the New People’s Army who need to give battle to those they seek to arrest but who resist arrest because they have abundant arms and are clothed with the authority of the exploiting classes and oppressive regime,” Sison said. ./atm