Foreign ministers from the world’s seven most developed nations on Saturday urged a greater role for women in solving conflicts, saying that peace settlements with female involvement were more likely to endure. 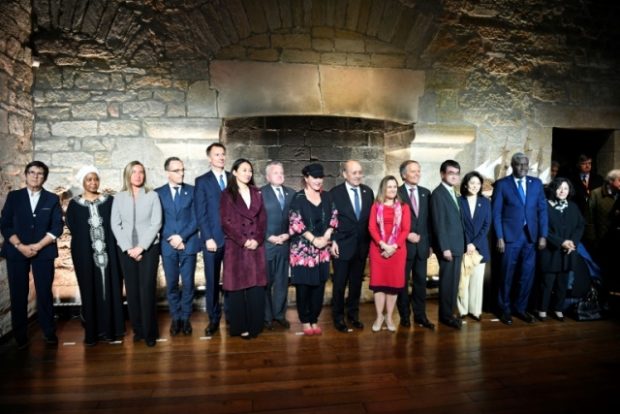 France has placed gender inequality at the heart of its G7 presidency and Saturday’s foreign ministers’ meeting ahead of an August summit urged a greater role for women in conflict resolution. Image: Damien MEYER – POOL/AFP

The Group of Seven (G7) ministers, at their meeting in the northern French resort of Dinard to prepare a summit meeting under French presidency in August, also called on greater mobilization worldwide to “prevent sexual and gender-based violence in conflict”.

“Women rarely sit at the negotiating table,” the final statement of the meeting said, adding that only rarely do peace agreements include provisions that protect women’s human rights.

“At the same time, we know that when women are meaningfully included and play an influential role in peace processes, peace agreements are more likely to last,” it said.

According to the UN Women’s agency, between 1990 and 2017, women constituted only two percent of mediators, eight percent of negotiators, and five percent of witnesses and signatories in all major peace process.

France has placed gender inequality at the heart of its presidency of the G7, though a plan to create a new mechanism to warn about sexual violence being used as a weapon during war was not included in a final joint statement.

Foreign Minister Jean-Yves Le Drian said that the countries had agreed a “roadmap” to adopt the mechanism.

The ministers vowed to enhance coordination to support “women’s participation in peace processes including in their roles as negotiators, mediators and peacebuilders.”

Efforts to respond to survivors and victims’ specific medical, psychological and social needs must be continued it said, hailing the efforts by 2018 Nobel Peace Prize laureates Nadia Murad and Denis Mukwege.

Meanwhile, the G7 ministers said they committed to deepen coordination among members of the group to “enhance our rapid response support to survivors and victims”. NVG