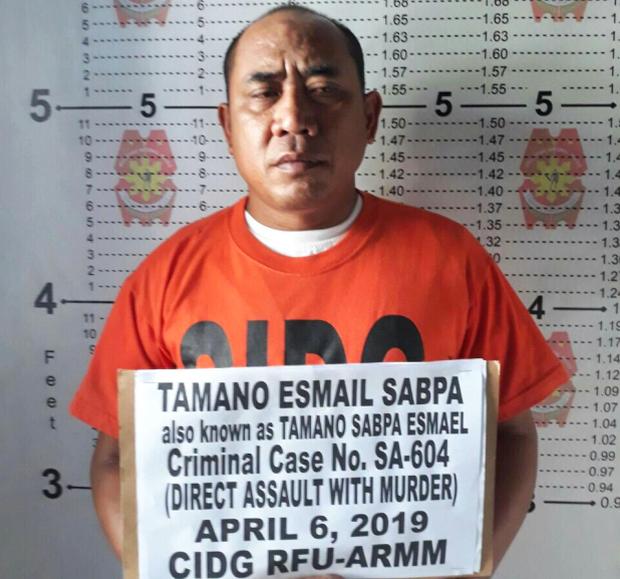 Tamano Esmail Sabpa was arrested on Saturday, April 6, 2019, for direct assault with murder in connection with the 2015 Mamasapano clash between Moro fighters and commandos of the Special Action Force. (Photo from PNP CIDG)

MANILA, Philippines — Authorities arrested on Saturday a suspect in the killing of commandos of the elite Special Action Force (SAF) during the 2015 Mamasapano clash in Maguindanao.

Tamano Esmail Sabpa, also known as Tamano Sabpa Esmael, was arrested at 2:00 p.m. at the parking area of a hospital in Cotabato City, according to the Criminal Investigation and Detection Group (CIDG) of the Philippine National Police (PNP).

The arrest was a joint operation by members of the CIDG in the Autonomous Region in Muslim Mindanao (ARMM) and Cotabato City police officers.

The arrest warrant for direct assault with murder was issued on Jan. 25, 2017, by Alandrex Betoya, presiding judge of Branch 15 of the Regional Trial Court in Kabacan, Cotabato.

The commandos killed Marwan, but Baco and Usman escaped.

READ: WHAT WENT BEFORE: Mamasapano clash