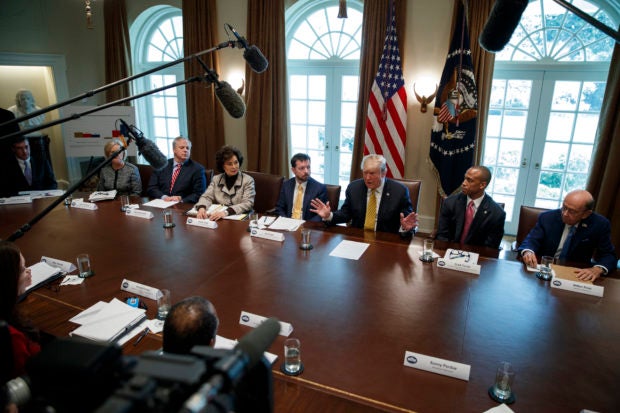 WASHINGTON  — Abandoning his threat to immediately seal the southern border, President Donald Trump warned instead on Thursday that he’d slap tariffs on cars coming to the U.S. from Mexico unless the Mexicans do more to stop the flow of migrants and drugs to the U.S.

In his latest backtrack in recent days, Trump told reporters he would try the “less drastic measure” before resorting to his standing border-closure threat.

“Mexico understands that we’re going to close the border or I’m going to tariff the cars.  I’ll do one or the other.  And probably start off with the tariffs,” Trump said.

He added later: “I don’t think we’ll ever have to close the border because the penalty of tariffs on cars coming into the United States from Mexico, at 25 percent, will be massive.”

It was the latest, seemingly sudden attempt at new leverage by a president struggling to solve what his administration has called a border “crisis.”

And it was a dramatic departure for Trump, who last week tweeted that he would close the border or large swaths of it this week unless Mexico immediately halted “ALL illegal immigration coming into the United States” — a seemingly impossible task.

Trump said at the time that he was “not kidding around,” and his acting chief of staff Mick Mulvaney said in a television interview Sunday that it would take “something dramatic” for Trump not to close down the crossings.

Since then, however, White House advisers, border city leaders and U.S. economists have warned that such a move would have enormous economic consequences on both sides of the border, interrupting supply chains and boosting U.S. consumer prices on everything from avocadoes to autos.

Trump in recent days has also backtracked on his push for Republicans to again take on health care and surprised his own education secretary by reversing a plan to ax federal aid for the Special Olympics.

Those actions have only added to longstanding concerns about whether Trump’s words can be trusted. Trump, who has long said his unpredictability is one of his greatest negotiating assets, has also followed through with some of his most bombastic threats, including forcing the country’s longest-ever government shutdown over border funding.

Trump had already appeared to be easing off his border threat earlier this week.

Though he said Tuesday all options remained on the table, he shifted his goal posts, calling on Congress to pass immigration legislation to avert a closure and praising the Mexican government for doing more to apprehend migrants traveling through the country from Central America — though it’s unclear anything has changed. /gsg

Read Next
Immigration bureau to blacklist 2 Chinese nationals in CDO
EDITORS' PICK
Water remains our saving grace right now
Digital hunt for Hyun Bin: 5 challenges for Smartees
Motostrada expands by handing over ‘Trident’ and adding new ‘Horseman’ to its growing business
WHO: Indoor airborne spread of coronavirus possible
No arrests to be made on 1st day of allowed pillion riding for couples — HPG
House panel set to meet for possible decision on ABS-CBN franchise bid
MOST READ
‘I will always speak up for you’: Server on defending Fil-Am family from racist rant
‘Nouveau’: Agot Isidro hits Jinkee Pacquaio’s show of luxury Hermes, Louis Vuitton bikes
Alfred Vargas inhibits from voting on ABS-CBN franchise renewal
Solon withdraws support for ABS-CBN franchise renewal
Don't miss out on the latest news and information.