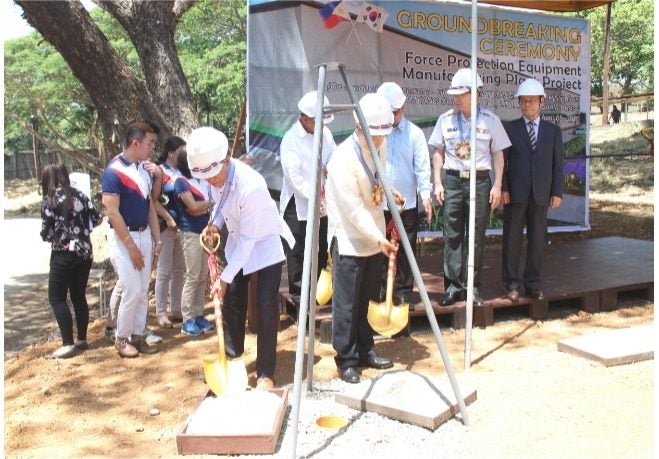 Officials during the groundbreaking ceremony for the construction of a factory for force protection equipment and 5.56 mm magazines at the Government Arsenal’s headquarters in Camp Antonio Luna, Limay, Bataan, on Friday, April 5, 2019. Photo from DND

It can be recalled that the Philippines and South Korea agreed to a co-production deal, which stemmed from a 2013 Memorandum of Understanding on logistics and defense cooperation.

Samyang and BuHueng will eventually transfer to the Government Arsenal the technology for the production and testing of force protection equipment like armor vests and ballistic helmets, as well as gun magazines.

“We submitted a bill to convert this area into a defense industrial complex so that we can have right to investors, we can enjoy tax holidays or incentives and then later on we can export also from this place anything that we manufacture here,” Lorenzana said in his speech.

Samyang’s facilities are expected to have an annual capacity of 20,000 sets of armored vest and ballistic helmets. BuHeung Precision will put up a 5.56mm 30-round magazine manufacturing plant that will supply the Philippine military.

The technology to be transferred would help develop the country’s self-reliance defense capability. At the moment, the military and law enforcement agencies are dependent overseas for their force protection equipment. /kga