MANILA, Philippines — The Senate on Thursday denied the allegations made by House appropriations panel chair Rolando Andaya Jr. that the upper chamber also made adjustments in the post-ratified version of the proposed 2019 budget.

According to Andaya, the Senate, through the Legislative Budget Research and Monitoring Office (LBRMO), was submitting adjustments in the post-ratified version of the 2019 national budget from February 11 to March 8.

LBRMO director general Yolanda Doblon confirmed that some of their staff were at the Committee on Appropriations Office, but she said they were only there to “prepare for the printing of the enrolled bill.”

“There is no need for the Congressman to furnish the Senators a copy of the CCTV of the House of Representatives,” Doblon said in a memorandum addressed to Senate President Vicente Sotto III explaining LBRMO’s side.

“Preparation of the enrolled bill requires the presence of the technical staff of both Houses to ensure that the amendments are carried in accordance with the Bicameral Conference Committee Report,” Doblon added.

She also explained that the alleged amendments “were already made known to the public” beforehand.

“I wish to inform the Senate President that the Chairman of the Committee on Finance read during the approval of the Bicameral Conference Committee Report the explanatory notes which outlined the amendments to the General Appropriations Bill,” Doblon said.

“The said explanatory notes were submitted to the Bills and Index, thus, the amendments mentioned in his press statements were already made known to the public,” the director general added.

Doblon said the LBRMO staff had been instructed to submit a summary report, including a timeline of their activities, to Sotto to address the issue.

“I have instructed the staff of LBRMO to submit to the Senate President a summary of the dates when they checked age clean copy of the budget of each agency to show proof that we did not submit piece-meal amendments that lasted until March 8, 2019,” Doblon said. /ee 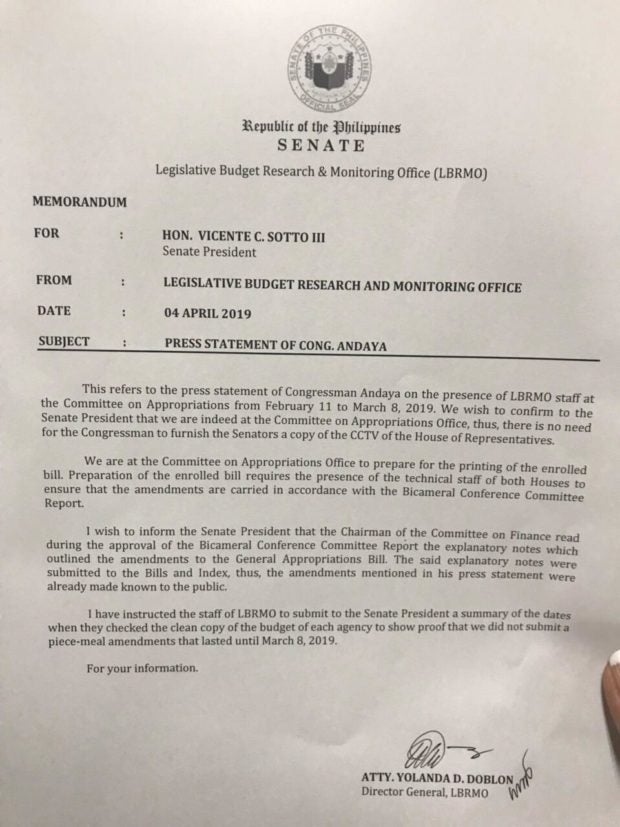 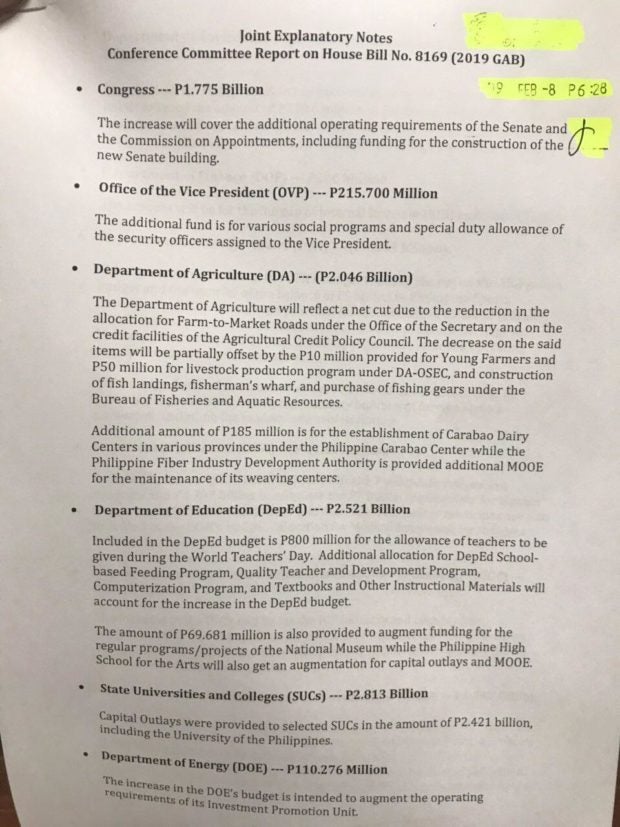 Read Next
Dalai Lama lauds New Zealand PM for handling mosque attacks
EDITORS' PICK
DILG to stranded workers: ‘Stay where you are’ until Luzon-wide quarantine is over
DILG says middle class will also get govt aid during Luzon-wide quarantine
IATF: Food firms to operate with 50% of workforce during Luzon quarantine
UP-PGH wards for COVID-19 patients finished in 5 days
Cebu City closes its borders
Style and music journeys with Claudia Barretto
MOST READ
Locsin blasts DOH for blocking entry of Chinese doctors
Another doctor dies due to COVID-19 in Cebu City, doctor-husband critical
DOH pressed to expand, speed up virus testing
No more bread? Company forced to limit production
Don't miss out on the latest news and information.