UK government, opposition to meet in search of Brexit plan 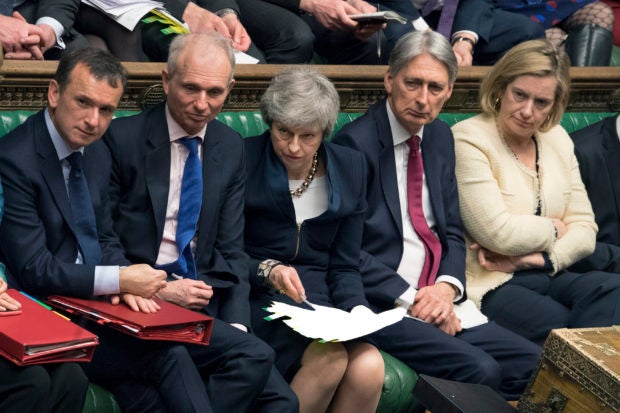 In this photo provided by the UK Parliament, Britain’s Prime Minister Theresa May, center, in the Palace of Westminster in London, Wednesday, April 3, 2019. A Brexit-related vote in Britain’s House of Commons on Wednesday ended in a tie, the first time that has happened in a quarter-century. Under Parliament’s rules, the speaker of the House has tie-breaking power. Speaker John Bercow cast his vote with the noes. He said that was in keeping with the principle that “it is not for the chair to create a majority that otherwise doesn’t exist.” (Mark Duffy/UK Parliament via AP)

LONDON – Meetings are planned Thursday between the British government and the opposition Labour Party in an urgent search for a compromise solution to the country’s departure from the European Union.

The upper House of Lords is also set to consider legislation that would force Prime Minister Theresa May to seek a delay from the EU. The bill is aimed at preventing a no-deal Brexit on April 12.

Business leaders warn that a “no-deal” Brexit would badly hurt commerce. There are concerns about food and medical supplies as well as fears of massive traffic jams at British ports, where borders checks would likely be put in place overnight once Britain leaves.

British police are warning politicians to tone down their rhetoric amid concerns about the volatile public mood as the future of Brexit is debated.

May hopes the warring factions in government can agree on a plan to be presented to EU officials ahead of an April 10 summit that will determine if the scheduled exit date can be delayed.

It is not clear how the EU will respond to a British request for a second delay to its departure from the bloc, which had originally been expected on March 29, two years after May signed a letter triggering the Article 50 divorce process.

Conservative Party legislator Ken Clarke, a former treasury chief, told the BBC Thursday that a long delay is necessary to give Britain time to develop a compromise plan.

“I think the EU would give us an extension,” he said. “They would be very angry with us, but I think the EU too would suffer if they just patched something together in the next eight days because it got fed up with our inability to make a clear consensus policy.” /gsg