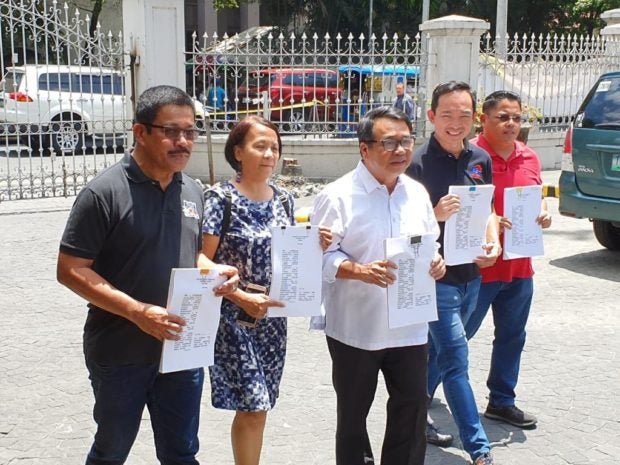 MANILA, Philippines — Bayan Muna chair Neri Colmenares, lawmakers from the Makabayan bloc, and a farmers’ organization have asked the Supreme Court (SC) to issue a temporary restraining order (TRO) against the Chico River Pump Irrigation Project, which was funded through Chinese loans.

In a 67-page document filed on Thursday, the complainants sought to stop the enforcement of the loan agreement as they claimed respondents President Rodrigo Duterte and other key members of the Cabinet violated provisions in the 1987 Constitution when they entered into deals with China.

“Upon the filing of this petition, a temporary restraining order (TRO) and/or a writ of preliminary prohibitory injunction be immediately issued restraining and/or enjoining the Respondents, and all persons acting under their command, order, and responsibility from further enforcing the Preferential Buyer’s Credit Loan Agreement on the Chico River Pump Irrigation Project between the Export-Import Bank of China and the Government of the Republic of the Philippines,” the petition’s prayer said.

Colmenares and the other complainants noted that Article 8.1 (Waiver of Immunity) of the Chico River Pump Irrigation loan agreement goes against the Constitution because the borrower — or the Philippine government (GRP) — “waives any immunity on the grounds of sovereign or otherwise for itself or its property in connection with any arbitration proceeding.”

“A reading of these provisions leads us to assert that the GRP has allowed its patrimonial assets to stand as security for unpaid obligations under this Loan Agreement,” the petition said.

“‘Collateralization’ of patrimonial property for unpaid obligations under a foreign loan contract or as an award in an arbitral proceeding is unconstitutional and illegal,” they added.

The petitioners also asked SC to order the release of documents regarding the Chico River Pump project and of the other Chinese deals.

“(It is most respectfully prayed that) an Order be issued directing Respondents to produce the following documents: 1. Procurement documents in granting the civil works to the Chinese contractor, and; 2. Other relevant documents in connection with this case,” they said.

“[…] An Order be issued to all concerned agencies of government to produce certified true copies, upon request, of all loan agreements executed by and between the Government of the Republic of the Philippines and China,” they added.

In an earlier report, SC’s Senior Associate Justice Antonio Carpio warned that patrimonial assets like the gas-rich region of Recto Bank in the West Philippine Sea can be seized by China if the Philippines fails to pay its loan obligations, including the $62-million deal for the Chico River Pump Irrigation project.

Carpio also noted that the country is in for several problems if the deal involving the Chico River Pump is considered a template for all China-Philippines deals, aincluding 20 agreements, which were signed during Chinese President Xi Jingping’s state visit in Novemeber 2018. /jpv