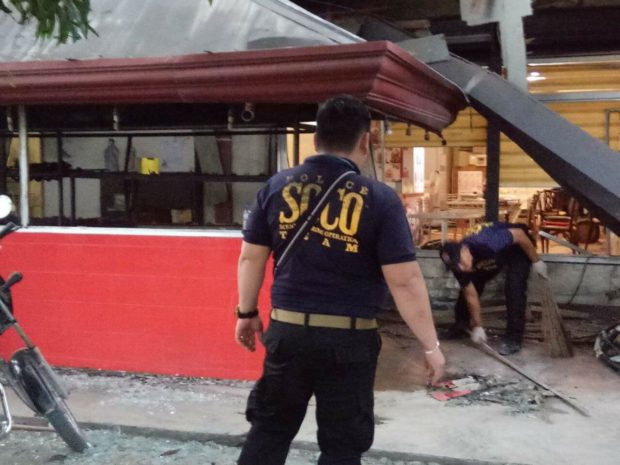 COTABATO CITY — Isulan town Mayor Maritess Pallasigue said they already had the identity of the suspects behind the 3:30 p.m. blast on Wednesday based on the closed circuit television (CCTV) recovered near the area.

“But we can not disclose it now as the investigation is on-going,” Pallasigue said.

In Koronadal City, the Commission on Human Rights in Soccsksargen (CHR-12) on Thursday condemned the blast that injured 18 people in Isulan calling it an act of a “madman on the loose.”

Pallasigue said the CCTV footage showed a mask-wearing suspect who left the improvised explosive device (IED) near the lechon house in front of Carlito’s Grill along the national highway of Barangay Poblacion.

Pallasigue also said a witness had told the suspect he left his plastic bag but was ignored.

The suspect fell in line at the lechon house where he bought lechon manok before he left the IED, which was triggered by a cellphone device.

Pallasigue doubted that the suspect intended to drop the bomb inside the restaurant where some families celebrated the graduation of their students.

The mayor was also puzzled how the bomb could have entered the city amid tightened security and the numerous checkpoints set up by the police.

Pallasigue also said the owner of Carlito’s Grill received an extortion letter only five days before the blast.

“It was only five days and here now, the bombing occured,” she said in a phone interview with the Inquirer.

But in a press conference with the military, the mayor said it was not an extortion letter but a text message that the owner received days before the blast.

The message, allegedly from Jemaah Islamiya, had asked for P50,000 monthly extortion money.

Establishment owners also received another call this morning threatening to launch more bombings if they would not give in to the demands.

Pallasigue said the Municipal Social Welfare and Development Office had been ordered to assist the 18 victims wounded by the blast confined in hospitals.

Erlan Deluvio, CHR-12 acting director,  stressed the rights body would not extend “any amount of sympathy, much less, a legal succor” to those responsible for the bombing.

“This scoundrel must be blasted to eternal damnation and may his soul be burned forever in the Valhalla of Eternal Pain and Suffering; his heart to be taken out and given as a prey to the beasts of the forest and vultures of the air, it having no tincture of use, or any glorious purpose for the benefit of mankind, and that it might be truly descriptive of himself- heartless and evil!” he said in a statement.

In Norse mythology, Valhalla refers to the “hall of the fallen.”

Among the victims of Wednesday’s blast inside Carlito’s Chicken House were six children and a pregnant mother.

Deluvio asked law enforcement agencies to intensify security measures and manhunt operations to capture the “madman along with his cohorts and deliver them to justice.”

“For how can we cleanse this Augean stables of criminal derelicts if we only sit in the sidelines and remain remiss in our solemn duty to serve and protect our people?” he asked.

“Cleanse the Augean stable” means to rid a place or entity of an accumulation of something distasteful. In Greek mythology, Hercules was tasked with cleansing the Augean stables—which had not been cleaned in 30 years.

Last year, five persons were killed and some 50 others were wounded when two separate blasts also hit Isulan, the capital of Sultan Kudarat.