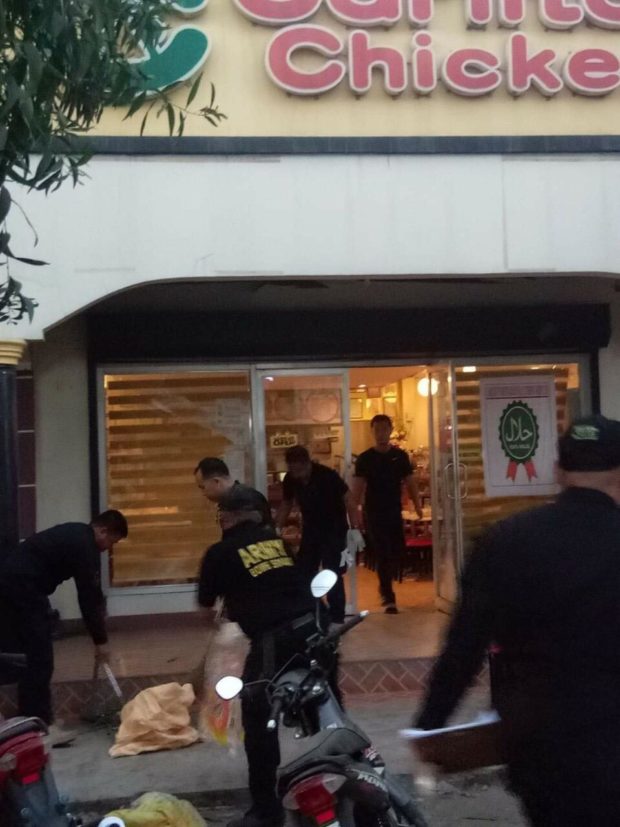 ISULAN, Sultan Kudarat, Philippines – Eighteen people were injured when a powerful improvised explosive device went off at 3:15 p.m. on Wednesday near the entrance of a restaurant on the national highway in Barangay Kalawag in this town.

Earlier, former presidential peace adviser Jesus Dureza, quoting Sultan Kudarat Gov. Pax Mangudadatu, said two children died while undergoing treatment in one of the hospitals. But the Isulan Municipal Police Station clarified that, as of 6:30 p.m., they had no reports of any fatality.

Lt. Col. Aldrin Gonzales, speaking for the Soccsksargen Police Regional Office, said the blast occurred at Carlitos Chicken, which was then packed with customers celebrating the graduation of relatives.

Lt. Col. Junny Buenacosa, Isulan police chief, said the 18 injured people had been identified, most of them Isulan residents.

Those hit by the blast were confined in four hospitals — the Holy Nazarene Hospital, the Isulan Doctors’ Specialist, and the Sultan Kudarat Provincial Hospital, all three in Isulan; and the St. Louis Hospital in Tacurong City.

Isulan Mayor Marites Pallasigue said police had identified “persons of interest,” but they were mum about the details.

She said police found cut nails in the blast site.

No one has claimed responsibility for the attack.

Albayalde said that an investigation team has been deployed to the scene.

“The post-blast investigation is still ongoing. We have deployed our Explosives and Ordinance Division to investigate. However, they cannot conclude yet what bomb was used,” Albayalde said in Filipino in an interview on AM radio station DZMM.

Albayalde added that authorities did not receive any tip prior to the explosion.

“We know martial law is still in place in Mindanao and security is heightened there, but sometimes criminals still manage to sneak in despite our efforts,” he said.

Two explosions rocked the town of Isulan — one on Aug. 28 and another on Sept. 2 last year — that left five persons dead and 45 others hurt.

The site of Wednesday’s explosion was not far from those explosions. /lzb /atm