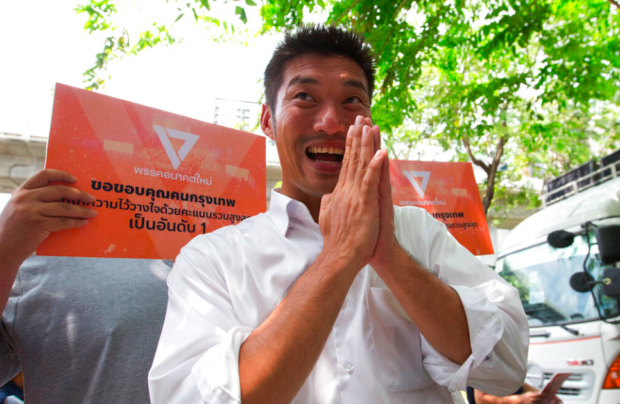 BANGKOK — Thailand’s ruling junta has filed a complaint accusing the leader of a popular new political party of sedition and aiding criminals, a move that its target described as politically motivated.

The party, Future Forward, ran a strong third in elections last month that were also contested by a pro-military party.

Future Forward’s leader, Thanathorn Juangroongruangkit, said he would report to police on Saturday to receive the summons against him. The potential penalty he would face is nine years in prison. The summons he received did not specify what actions were the cause for the complaint.

Thanathorn and his party already have several criminal complaints and protests to the Election Commission lodged against them.

Speaking to reporters on Wednesday before a tour of a Bangkok neighborhood to thank voters, Thanathorn said the new legal action against him was expected and “nothing new.”

“We are prepared mentally. There’s nothing to worry about,” he said. “We believe in our innocence. We believe these cases are politically motivated.”

Preliminary results of the March 24 general election failed to give any single party a majority, making it unclear whether pro- or anti-junta parties would hold a majority in the House of Representatives.

The Future Forward Party is a junior partner in an anti-junta coalition that claims have a majority of seats, but the final official voting results won’t be released until May 9.

Between now and then, there could be shifts in party alliances, and there is concern that the state Election Commission, widely regarded as sympathetic to the junta, could disqualify the already elected candidates of its opponents.

The army has several times publicly shown its disdain for the left-leaning political line that the Future Forward Party stands for. The country’s influential army chief on Tuesday issued a thinly veiled attack on the party, not mentioning it by name but implying that it has foreign-influenced ideas unsuitable for the “Thai-style democratic system,” which is a constitutional monarchy.

Gen. Apirat Kongsompong, the ruling junta’s secretary-general, said the army would do its duty, “which is to protect, maintain and defend the institutions of nation, religion, and monarchy.”

Respect for the monarchy is a sensitive and emotional issue in Thailand, and accusations of disrespect are sometimes used by opportunists to smear their political opponents. Thailand has a lese majeste law that makes criticism of the monarchy punishable by up to 15 years’ imprisonment.

Self-interest could also play a part in the junta’s actions against Thanathorn. He has said his party’s primary agenda is to stop Thailand’s military from intervening in politics, and also suggested its budget be slashed.

The military has governed Thailand since then-army commander Prayuth Chan-och staged a coup in 2014 against an elected government. Since then, Prayuth has been serving as junta leader and prime minister, and is the candidate of the pro-military Palang Pracharath Party, which according to preliminary results grabbed the biggest share of the popular vote in last month’s election.

According to a constitution implemented under the junta, it takes a joint vote of the elected House of Representatives and the appointed Senate to name a new prime minister, giving Prayuth a great advantage.

However, his opponents could still control a majority in the lower house, making it difficult for him to pass laws or get a budget approved, and making any government he would head unstable because of the possibility it would face a vote of no confidence. /ee