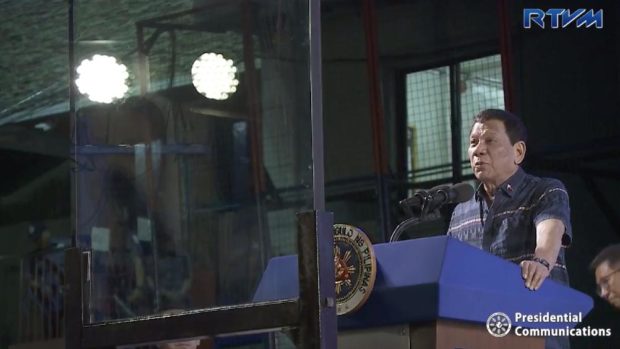 MANILA, Philippines — With or without an outstanding threat, the Presidential Security Group (PSG) is mandated to implement stiff security protocols to ensure the safety of the President, according to PSG Commander Brig. Gen. Jose Eriel Niembra.

Niembra issued the statement on Wednesday after President Rodrigo Duterte spoke behind a bullet-proof glass during a campaign rally of the Partido Demokratiko Pilipino–Lakas ng Bayan (PDP-Laban) in Malabon City.

Niembra also explained that the PSG decided to put bullet-proof glass on the presidential podium because the activity was held in an open area.

“Whilst our President wanted to have a close encounter and dialogues with the people, PSG acknowledges the need to balance (the) security and accessibility of the President,” he added.

During the event on Tuesday night, Duterte said that someone wants to kill him, though he did not elaborate.

READ: ‘Someone wants to kill me,’ Duterte says at Malabon rally

Duterte also lamented that he had no “control” over the security arrangements prepared by his security.

(You know, this picture frame is beyond my control. Even if I don’t want it, I can’t order the PSG, the presidential guards. We need to follow them.)

(When I was new, I insisted that they follow me because the people can no longer come near me. I’m used to embracing them when I was mayor, especially if there are many women.) /ee