‘Someone wants to kill me,’ Duterte says at Malabon rally 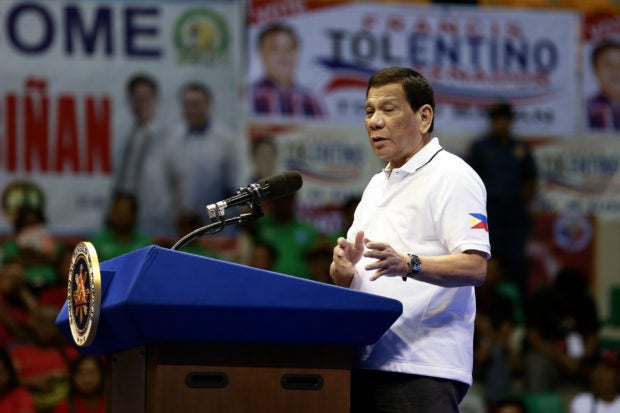 MANILA, Philippines — President Rodrigo Duterte on Tuesday spoke behind a bulletproof glass screen during his speech at the campaign rally of Partido Demokratiko Pilipino–Lakas ng Bayan (PDP-Laban) in Malabon City.

Duterte started his speech by saying that someone would want him dead.

[Someone wants to kill me. But then I think life is a matter of luck. If it‘s my time to go, there’s nothing I can do.]

At one point, the President even inspected the glass himself and said that it was beyond his control as it was the call of the Presidential Security Group (PSG).

[You know, this picture frame right here is something beyond my control. Even if I feel bad about it, even if I get angry, I can’t contradict the security of the PSG, the presidential guard, because they are the ones in control. When I was starting out, I kind of insisted that they should follow my lead. Otherwise, people won’t be able to get near me. I’m used to being a mayor when I could go directly to them and embrace them. Especially if there are many women, I really linger.] /atm

Read Next
Duterte tells public: You owe nothing to politicians
EDITORS' PICK
Smart celebrates all kinds of ‘#SimplyLove’ for Pride Month
‘Work from beach’ suits Pinoy digital nomads
SANTIS Delicatessen: The road to survival is sweet and savory
SWS: Over 12M Filipinos still jobless as of May 2021
Smart brings KCON:TACT especially 4U to subscribers from June 19 to 27
Another Filipino falls victim to hate attack in California
MOST READ
Gordon eyes VP running mate for 2022 polls
Gilas Pilipinas routs Indonesia anew, stays unbeaten in Fiba Asia Cup qualifiers
Landmark tale of corruption
William Martinez sometimes feels his kids ‘don’t remember’ him anymore
Don't miss out on the latest news and information.